Trump Takes Aim at Capitol Police Officer and 'Ruthless Man' Who Killed Ashli Babbitt, Says 'He Thinks It Was Great That He Shot Her' (VIDEO)

In an on-camera interview with MSNBC in August, Byrd claimed that he saved “countless lives” by shooting the unarmed woman.

Trump was discussing Sen. Lindsey Graham’s opposition to pardoning January 6 protesters and the people killed during the Black Lives Matter riots when he brought up Babbitt.

Speaking of Byrd, Trump said that the officer was “a ruthless man that never should have used his gun to shoot her.”

“And he’s a hero to the left,” Schmitt interjected.

“I think it’s a disgrace, and in fact, they wanted to shield him. but he couldn’t get on television fast enough,” Trump said. “I saw his interview, and he thinks it was great that he shot her and killed her, and she didn’t have a gun. She didn’t have anything. There was no reason to do that.”

At the time of his MSNBC interview, Byrd’s identity had been floating around right-wing media for months but had never been confirmed by authorities. He claimed that he was subjected to threats as a result of his name being released.

In an exclusive interview with @LesterHoltNBC, Capitol Police Lieutenant Michael Byrd describes why he’s choosing to identify himself. Byrd shares his account of the January 6 riot, as officers barricaded the door and he fired a single shot, killing Ashli Babbitt. pic.twitter.com/5E7KPtxNc2

“I know that day I saved countless lives,” Byrd said during the interview with Lester Holt. “I know members of Congress, as well as my fellow officers and staff, were in jeopardy and in serious danger. And that’s my job.”

Byrd claimed that the shooting was a “last resort” and that he had been hearing reports of shots fired over his police radio, though those reports were ultimately determined to have been false.

“I tried to wait as long as I could,” he told Holt. “I hoped and prayed no one tried to enter through those doors. But their failure to comply required me to take the appropriate action to save the lives of members of Congress and myself and my fellow officers.”

Byrd said that it sounded like there were “hundreds” of protesters beyond the doors and that he was unaware that there were officers standing behind Babbitt.

“At that point is when I realized they’re here,” Byrd said, referring to the rioters. “The chants got louder. I couldn’t make out what they were saying, but it sounded like hundreds of people outside of that door.”

“It was impossible for me to see what was on the other side,” he said.

Byrd also claims that he could not see that Babbitt’s hands were empty.

“I could not fully see her hands or what was in the backpack or what the intentions are,” Byrd said. “But they had shown violence leading up to that point.”

Investigations by the Capitol Police and the Justice Department cleared the officer of any wrongdoing.

“The investigation revealed no evidence to establish that, at the time the officer fired a single shot at Ms. Babbitt, the officer did not reasonably believe that it was necessary to do so in self-defense or in defense of the Members of Congress and others evacuating the House Chamber,” federal prosecutors said in a statement.

Former President Trump has repeatedly stated that Babbitt was murdered and has been outspoken in his support for her family. During a rally on her birthday, he called for the Department of Justice to re-open the investigation into her shooting in a video message.

“I offer my unwavering support to Ashli’s family— And call on the DOJ to re-open the investigation into her death on January 6th” pic.twitter.com/VWhFUMtpcg 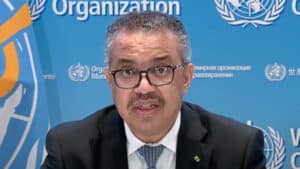 WHO Warns Countries About Dangers of Easing COVID-19 Restrictions