Trump Reportedly Plans to Purge the 'Deep State' if He Wins Next Election, Will Use Executive Order to Strip Employment Protections

Former President Donald Trump plans to purge the federal government if he runs and wins the presidency back in 2024, according to a new report.

Trump would be permitted to fire as many as 50,000 government employees under an Executive Order that he signed prior to the 2020 election.

The order, “Creating Schedule F in the Excepted Service,” created a new category for federal employees that would allow them to be terminated, unlike the strong protections that many currently are awarded.

“The Federal Government benefits from career professionals in positions that are not normally subject to change as a result of a Presidential transition but who discharge significant duties and exercise significant discretion in formulating and implementing executive branch policy and programs under the laws of the United States,” the order states. “The heads of executive departments and agencies (agencies) and the American people also entrust these career professionals with non‑public information that must be kept confidential.”

President Joe Biden rescinded this order upon taking over the White House, but according to a new report from Axios, sources close to the former president say that reinstating it would be at the top of Trump’s agenda if he gets a second term.

As things currently stand, the president is allowed to fire roughly 4,000 government workers who are considered to be political appointees. The majority of government workers, however, expect to keep their jobs no matter who is in office and have employment protections in place.

Roughly 50,000 workers are estimated to fall under Schedule F, should it be reinstated. That category is described in the order as “positions of a confidential, policy-determining, policy-making, or policy-advocating character not normally subject to change as a result of a Presidential transition.”

Axios reports that, “the impact could go well beyond typical conservative targets such as the Environmental Protection Agency and the Internal Revenue Service. Trump allies are working on plans that would potentially strip layers at the Justice Department — including the FBI, and reaching into national security, intelligence, the State Department and the Pentagon, sources close to the former president say.”

The outlet reports that the sources they spoke to said they do not expect Trump to actually fire 50,000 people, but rather target “bad apples” to make the rest fall in line. 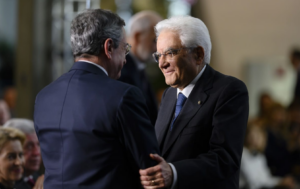