Former President Trump has withdrawn his endorsement of Rep. Mo Brooks for the Alabama senate primary, referring to him as “woke” and blasting him for saying that it is time to put 2020 election fraud claims to rest.

Trump said that he will be endorsing one of Brooks’ opponents in the “near future.”

45: Since he decided to go in another direction, so have I, and I am hereby withdrawing my Endorsement of Mo Brooks for the Senate. pic.twitter.com/CNDHqC4pbh

“When I endorsed Mo Brooks, he took a 44-point lead and was unstoppable. He then hired a new campaign staff who ‘brilliantly’ convinced him to ‘stop talking about the 2020 Election,'” Trump said in a statement on Wednesday.

Trump went on to refer to remarks Brooks made in August about putting the 2020 election fraud claims “behind you.”

“Mo Brooks of Alabama made a horrible mistake recently when he went ‘woke’ and stated, referring to the 2020 Presidential Election Scam, ‘Put that behind you, put that behind you,'” Trump’s statement continued. “I am hereby withdrawing my Endorsement of Mo Brooks for the Senate.”

Brooks has been a staunch Trump supporter, even speaking at the January 6, 2021 “Stop the Steal” rally, saying, “today is the day American patriots start taking down names and kicking ass.”

WATCH: Republican Congressman Mo Brooks is being sued by a Democratic colleague over this speech he gave to the MAGA crowd just hours before the insurrection pic.twitter.com/UDUzGKoOlr

Brooks was named as a defendant in a lawsuit over his remarks by Democrat Rep. Eric Swalwell, along with former President Donald Trump, Donald Trump Jr., and Trump attorney Rudy Giuliani.

That lawsuit was dismissed earlier this month. 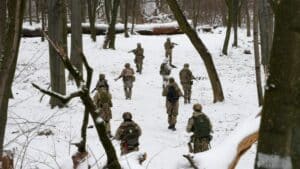