Trump Calls for Convicted Drug Dealers to Be Sentenced to Death: 'Execute a Drug Dealer and You’ll Save 500 Lives'

Former President Donald Trump called for the executions of convicted drug dealers during his speech in DC on July 26.

Trump made the remarks during his speech at the America First Policy Institute, his first time back in the nation’s capital since leaving the White House.

“The penalties should be very, very severe. If you look at countries throughout the world, the ones that don’t have a drug problem are ones that institute a very quick trial death penalty sentence for drug dealers,” Trump asserted.

In his ‘America First’ speech in DC, Trump goes on a long tangent about how the US needs to copy China and other authoritarian countries by executing all drug dealers after a “very quick trial,” claiming those countries have “no drug problem whatsoever.” pic.twitter.com/MqjzrQJOdX

The potential 2024 candidate acknowledged that it “sounds horrible,” but pointed to the lack of drug problems in nation’s with this policy.

“It sounds horrible, doesn’t it? But, you know what? That’s the ones that don’t have any problem. It doesn’t take 15 years in court. It goes quickly, and you absolutely— you execute a drug dealer and you’ll save 500 lives,” Trump continued. “It’s terrible to say, but you take a look at every country in this world that doesn’t have a problem with drugs, they have a very strong death penalty for people that sell drugs.”

Former Pres. Trump: “You execute a drug dealer and you save 500 lives …. It’s time to get brutally tough on the dealers and traffickers and narco-terrorist cartels who are stealing over 200,000 American lives a year.”pic.twitter.com/1n6udglvDc

There are 30 nations in the world with a possible death penalty sentence for drug related crimes.

According to a 2020 report from Harm Reduction International, “there were 30 confirmed executions for drug offences in 2020, down from 116 in 2019. All of the executions took place in 3 countries (China, Iran and Saudi Arabia).” The report noted that there are at least 3,000 people currently on death row for drug offenses globally.

Trump’s comments were part of a larger discussion of his desire to crack down on crime. He also called for a police car to be parked on every corner.

In order to get serious about tackling the crime problem, Trump said that the nation needs to “be tough and be nasty and be mean if we have to.”

“We’re living in such a different country for one primary reason: There is no longer respect for the law, and there certainly is no order. Our country is now a cesspool of crime,” Trump said. 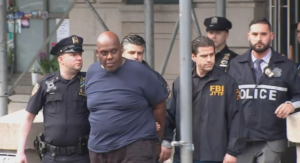