The video follows a series of 2024 campaign policies should the former President be re-elected.

“Fentanyl, heroin, meth, and other illegal drugs are pouring across our wide open border stealing hundreds of thousands of beautiful American lives and it’s happening like never before in our history,” Trump opened the video. “Children are being left without parents, families are being ripped apart, communities are being decimated, our neighbors and fellow citizens are having their entire worlds destroyed … like nobody thought possible.”

“Our country is being poisoned from within by the drugs and by all of the other crime that’s taking place.”

“The drug cartels are waging war on America—and it’s now time for America to wage war on the cartels,” Trump continued. “In this war, Joe Biden has sided against the United States and with the cartels. They are making more money than they’ve ever made before … Biden’s open border policies are a deadly betrayal of our nation.”

The former President said his policy, should he be re-elected, will be to “take down” drug cartels in a similar manner to his handling of ISIS.

“We will show no mercy on the cartels,” Trump continued, saying traffickers were using border states to transport product into the country. “I will deploy all necessary military assets including the [United States] Navy to impose the full Naval embargo on the cartels.”

“Furthermore, I will order the Department of Defense to make appropriate use of special forces, cyber-warfare, and other overt and covert actions to inflict maximum damage on cartel leadership, infrastructure, and operations,” he continued. “I will designate the major cartels as foreign terrorist organizations. We will sever their access to global financial systems.”

Trump said he will develop a partnership with Mexico and neighboring governments to assist in curbing drug traffickers and cartels, noting Mexican citizens were also effected by Biden’s open borders policy.

“I will ask Congress to pass legislation ensuring that drug smugglers and human traffickers receive the death penalty.”

“The drug cartels and their allies in the Biden administration have the blood of countless millions on their hands,” he continued. “Millions and millions of families and people are being destroyed. When I am back in the White House, the drug kingpins and vicious traffickers will never sleep soundly again.” 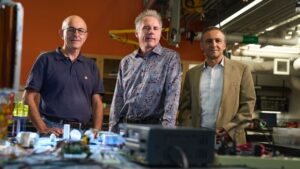