Health officials in the United Kingdom have also reported more than 1,700 cases

The number of monkeypox cases continues to rise in major cities including New York City and London.

The New York State Health Department announced on July 11 that there have been 223 confirmed cases of the virus in the city as well as 15 in the surrounding area. Twice as many people now have monkeypox in New York compared to one week earlier. The department had announced on July 5 that the total number of cases was 111.

“While New Yorkers should not be alarmed, everyone should stay informed about monkeypox. This means understanding the symptoms, how it spreads, and what to do if you are exposed,” the department noted on its website.

The current outbreak of monkeypox is largely among gay, bisexual, and other men who have sex with men.

“If you have multiple or anonymous sex partners, your likelihood of exposure is high,” states NYC Health.

Symptoms of the illness include fever, headache, chills, and fatigue. The virus most notably produces rash, bump, or blister-like pustules on the hands, genitals, face and feet of infected people. While rarely fatal, the virus can be extremely painful and result in permanent scars.

Though the virus is most commonly spread through close physical contact, the New York State Health Department notes “it can also be spread through contact with objects or fabrics (e.g., clothing, bedding, towels) that have been used by someone with monkeypox.”

Imvanex, a vaccination approved for smallpox, has been found to be effective against monkeypox, which shares a common genus group. It is being offered to those at high risk of contracting the virus.

“Demand for the vaccine has been high and supply has been low, which prompted New York City to request more shots from the federal government last week,” reports Fox 5 NY.

Like New York City, London is taking action to control the spread of monkeypox. There are 1,735 confirmed cases of the virus in the United Kingdom as of July 12. An estimated 75% of the cases are in London.

The UK Health Security Agency purchased 20,000 doses of Imvanex in May to reduce risk of illness in those who are considered close contacts of infected people. Contacts may also be advised to isolate for 21 days.

Those with monkeypox were advised to wash their clothing and bedding and to abstain from sex with the symptomatic.

“Whilst there is currently no available evidence of monkeypox in genital excretions, as a precaution, cases are advised to use condoms for 8 weeks after infection and this guidance will be updated as evidence emerges,” the UKHSA said in a joint statement with the Public Health Scotland, Public Health Wales and Public Health Agency Northern Ireland.

The World Health Organization declined to declare the monkeypox outbreak a global health crisis in June but is expected to hold an emergency meeting regarding the virus on or before July 18, per Fox News.

There are over 9,600 cases of monkeypox in 60 countries outside of central and West Africa, where the disease is considered endemic. 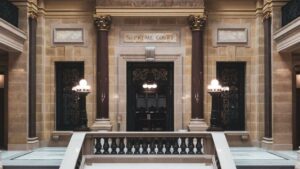 New Data: Americans Are Deeply Divided Over the Supreme Court