‘Our organization is run on COVID money now,’ a senior scientist said. ‘I work for an evil corporation.’

In the latest installment of their series investigating the COVID vaccine, Project Veritas spoke with three Pfizer officials who said antibodies offer equal or better protection from the virus compared to the vaccine.

“When somebody is naturally immune — like they got COVID — they probably have more antibodies against the virus,” said Nick Karl, a biochemist involved in the production of Pfizer’s COVID vaccine. “When you actually get the virus, you’re going to start producing antibodies against multiple pieces of the virus … So, your antibodies are probably better at that point than the [COVID] vaccination.”

Even so, Karl, whose LinkedIn profile has been deleted, speculated that vaccine mandates in New York City are intended to pressure unvaccinated citizens until they give in.

“The city needs like vax cards and everything,” he said. “It’s just about making it so inconvenient for unvaccinated people to the point where they’re just like, ‘F— it. I’ll get it.’ You know?”

He elaborated: “If you are restricting people that are unvaccinated from doing anything, and then vaccinated people are allowed to do anything they want, eventually they’re just going to be, like, f—, let me just get vaccinated.”

“Probably more,” Croce said. “You’re protected most likely for longer since there was a natural response.”

When the journalist asked Croce if she should get the vaccine, he advised her to “wait.”

He added: “If your immunity starts to wane, then get vaccinated.”

Croce went on to explain that monoclonal antibody treatment, a preventative therapy against COVID, got “pushed to the side [because of] money. It’s disgusting.”

“I still feel like I work for an evil corporation because it comes down to profits in the end,” Croce said, shortly after asking if the journalist was “wearing a wire.”

He continued: “I mean, I’m there to help people, not to make millions and millions of dollars. So, I mean, that’s the moral dilemma.”

“Isn’t it billions and billions?” the journalist pressed.

“I’m trying to be nice,” Croce laughed. “You have multiple companies that were basically given a crap ton of money to produce vaccines and they’re pushing them. … Basically, our organization is run on COVID money now.”

He claimed Pfizer “netted over $15 billion last year” — a figure that the company projected in February.

Moreover, Croce said the company is currently running a test to determine if and how often the vaccine might be leading to heart attacks. He stated that myocarditis, an inflammation of the heart muscle, is a pressing concern — “more so for younger people,” he said. “That’s what we’re looking into right now.”

He said they’re currently awaiting the results of 3,000 patients’ samples that they sent out to be tested for troponin levels, a method for detecting heart injury.

A third Pfizer scientist, Rahul Khandke, described how the company conducts discussions about the vaccine.

“We’re bred and taught to be like, ‘[the] vaccine is safer than actually getting COVID,’” he said. “Honestly, we had to do so many seminars on this. You have no idea. Like, we have to sit there for hours and hours and listen … like, ‘you cannot talk about this in public.’

“Logically though, if you have antibodies built up, you should be able to prove that you have those built up,” Khandke added.

These hidden camera admissions were released on the same day that The Lancet medical journal published a study showing the effectiveness of the Pfizer-BioNTech vaccine drops below 50% after five months.

The researchers performed an analysis of 3.4 million health records of male and female members of the Kaiser Permanente Southern California organization. While vaccines demonstrated 88% effectiveness during the first month following full inoculation, the effectiveness fell to 47% after five months.

“The government doesn’t want to show that the darn vaccine is full of s—,” Dr. Maria Gonzales, an ER Doctor with the U.S. Department of Health and Human Services, said.

“Don’t get the Johnson & Johnson [COVID vaccine],” Justin Durrant, a scientist at the company said. “I didn’t tell you though.”

Project Veritas said they will be releasing more videos involving Pfizer in the “very near future.” 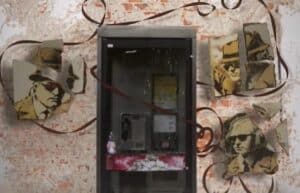