An auction of the only remaining remnants of the original Banksy Spy Booth wall mural, which is being sold as a hybrid non-fungible token (NFT), has been rescheduled after overwhelming traffic crashed the host’s servers.

The Spy Booth mural was previously believed to have been destroyed, by nine remaining remnants were obtained by multimedia firm Cosmic Wire. The brick pieces, which feature the faces of three of the spies, are being sold along with a one-of-a-kind NFT that will “help bring this legendary piece of art back to life.”

“The crash was equal parts exhilarating and anxiety-inducing to live through in real time,” Cosmic Wire CEO Jerad Finck said in a statement provided to Timcast. “We knew there was a lot of interest surrounding the piece, we felt the energy, but had no idea it would be like this. Our server CPU hit 98% within two minutes of starting the auction causing the site to go down, followed by intermittent blips of life over the next several hours with hundreds of millions of hits steadily rolling in. So, we had to call it off because we didn’t want legitimate bidders to miss out on this opportunity. We’re back up on a designated server and look forward to the auction.”

The iconic mural was painted by the street artist in 2014. It features three 50’s-era spies listening in on a conversation at a phone booth on the side of a building in Cheltenham, England. The art was just a few miles from the headquarters of the Government Communications Headquarters – the intelligence and security organization of the United Kingdom.

Two of the spies have long been believed to represent Julian Assange and Edward Snowden.

Efforts were made to preserve the painting by community groups and the local government, but the building it was on was rapidly deteriorating and they were ultimately unsuccessful. In 2016, the entire mural vanished.

The auction will now take place on Friday, October 8 from 12pm PST – 5pm PST. Cosmic Wire says that 100% of the NFT royalty downstream proceeds will be donated to the Coalition for Rainforest Nations whose mission is to Reduce Emissions from Deforestation and Degradation (REDD+) to stop deforestation.

Cosmic Wire says that chain of custody and certification will be provided to the winner of the tablets.

The website for the auction also features games that people can play for a chance to win a free NFT. 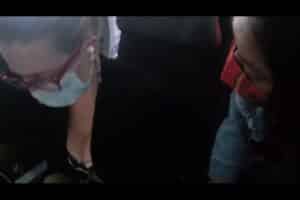