Three Out of Four Americans Oppose Bureau of Land Management's Plan to Roundup 19,000 Wild Horses in 2022

New polling has revealed that 74 percent of American voters, regardless of political affiliation, oppose taxpayer-funded helicopter roundups of wild horses and burros by the Bureau of Land Management (BLM).

In addition to generally disapproving of the horse roundups, three out of four Americans also expressly oppose BLM’s plan to remove 19,000 wild horses from western public lands in 2022.

The polling was sponsored by the American Wild Horse Campaign, the nation’s leading wild horse protection organization, and conducted by Public Policy Polling.

“These findings come at a time when the BLM has accelerated roundups in an attempt to reduce wild populations to pre-protection levels of just 17,000 animals, a number that Congress called ‘fast disappearing’ when it passed the Wild Free Roaming Horses and Burros Act in 1971. Fifty-one years later, the BLM is dramatically increasing the number of wild horses and burros confined to government holding facilities, straying far from public opinion,” the American Wild Horse Campaign said in a press release obtained by Timcast.

The statement added, “mounting abuses have recently led to calls to halt the roundups and prompted federal legislation to ban the use of helicopters to stampede and capture the animals. Earlier this year, 69 members of Congress weighed in to support federal funding for fertility control vaccine programs as a humane alternative to roundups for the management of wild horses and burros in the wild.”

Roundups have cost American taxpayers $53.2 million since 2006, according to the AWHC.

“This is one issue on which Republicans and Democrats agree on. America’s wild horses should be protected and stay wild on our public lands, not brutally rounded up and slaughtered,” Suzanne Roy, Executive Director of AWHC, said in a statement provided to Timcast. “The majority of voters also side with Congress in supporting birth control options to manage herd populations.”

“Clearly the BLM and its approach to managing herds of wild horses and burros is out of touch with the American public. Unfortunately in many Western states, the BLM is gearing up to host so-called adoption events that often end sadly for the horses and serve as a systemic reminder as to how broken the BLM’s herd management program is,” Roy continued. “It’s time to look beyond the good image the BLM tries to present. The more the American public knows about the BLM, the less supportive it is of the inhumane and outdated approach to wild horse and burros.”

AWHC is urging Americans to pressure their representatives in Congress to support the 2022 Horse Protection Platform. 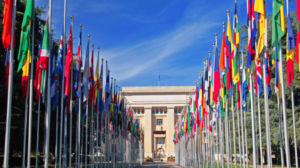