They are traveling aboard a SpaceX Crew Dragon vehicle atop a Falcon 9.

“The mission, Axiom’s first, will be the first time an all-civilian crew docks at the space station,” notes The Hill.

Larry Connor, an American entrepreneur, Mark Pathy, a Canadian businessman who founded Mavrik Corp, and Eytan Stibbe, a former Israeli fighter pilot and partner in Vital Capital, are all aboard the crew.

Each man paid $55 million to take part in the mission, according to AP News.

The fourth member is Axiom vice president of business development Michael Lopez-Alegria, a former NASA astronaut who has been to space on four previous occasions.

“It was a hell of a ride and we’re looking forward to the next 10 days,” he said once the spacecraft had reached orbit.

While aboard the ISS, the crew is set to carry out 25 experiments over the course of a cumulative 100 hours.

The private crew will have access to almost all of the station, except the Russian sections of the ISS. They will need permission from the three cosmonauts aboard to enter those sections.

SpaceX reported that the men, whose identities were announced in January 2021, spent between 740 to 1,000 hours training for the mission.

“While the Ax-1 astronauts did not receive the same intense level of training that NASA astronauts receive before flying to the ISS, they learned basic protocols they’ll need to use for being a guest on the station, such as how to use the food galley and dealing with hygiene in microgravity,” reports The Verge. “ The Ax-1 team also learned emergency response training in case there’s a major disaster on board the ISS.”

The launch comes two years after SpaceX took a crew of NASA astronauts to the ISS.

Once the inaugural private crew returns to Earth, the company plans to send another crew to the ISS on April 21.

That crew, comprised of three NASA astronauts and one European astronaut, will stay at the orbiting laboratory for six months. 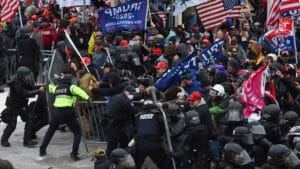 Trump Says He Wanted to March to the Capitol on January 6, But Secret Service Wouldn't Allow It