Texas’s Senate Bill 8 — which prohibits abortion after six weeks of pregnancy or when a fetal heartbeat is detected — has been suspended by a federal judge.

U.S. District Judge Robert Pitman’s decision is considered the first legal blow to the Texas law, which was signed by Governor Greg Abbott and took effect in September.

The law was widely denounced by pro-choice advocates, who argued many women do not know they are pregnant at six weeks. They also objected to the provision for private citizens to sue anyone who helps a woman obtain abortion services and potentially receive $10,000 in damages per instance.

Pitman issued an 113-page opinion objecting to the law, which he called “an unprecedented and transparent statutory scheme.”

“From the moment S.B. 8 went into effect, women have been unlawfully prevented from exercising control over their lives in ways that are protected by the Constitution,” wrote Pitman. “That other courts may find a way to avoid this conclusion is theirs to decide; this Court will not sanction one more day of this offensive deprivation of such an important right.”

Pittman, a Barack Obama appointee, is Texas’ first openly gay federal judge, according to Texas Lawyer. He is currently an adjunct professor at The University of Texas at Austin School of Law, where he received his J.D. Before his appointment in 2014, Pittman was the United States Attorney for the Western District of Texas and a United States Magistrate Judge.

In September, he motioned for an expedited briefing, which stopped the hearing from being rescheduled sooner and allowed Senate Bill 8 to stay in place.

Under his ruling, medical professionals may perform abortions without facing legal repercussions.

“But even with the law on hold, abortion services in Texas may not instantly resume because doctors still fear that they could be sued without a more permanent legal decision,” per AP News.

The state argued during the hearing that the federal government has no authority to sue the state and that it would be unfair to issue an injunction against people who could not be heard at trial. If the state challenges the judge’s ruling, the Supreme Court would be tasked with deciding on the injunction.

The nation’s highest court began its current session on Monday. In December, the court will hear arguments in Mississippi’s battle to overturn Roe v. Wade and to uphold the state’s ban on most abortions after the fifteenth week of pregnancy.

Planned Parenthood published a report on Friday saying 26 states are primed to ban abortion if the Supreme Court overturns the 1973 case. The report noted that 90 of the 600 abortion restrictions introduced in multiple states during the past year have become law. 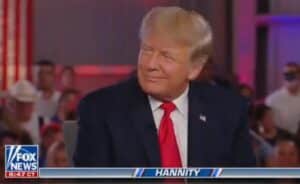