Governor Greg Abbott of Texas announced he has reached a second and third border security agreement with Mexican governors aimed at preventing illegal crossings along the Southern border.

The governor announced on April 14 that, as part of the new agreements, he will stop the increasingly stringent inspection of commercial vehicles that have led to high traffic and delays at international bridges.

During a joint public appearance, the Texas governor and Chihuahua Governor María Eugenia Campos Galván announced they reached a mutually beneficial agreement regarding border security. The state of Chihuahua is home to Ciudad Juárez, a large border town with a crossing between the Rio Grande and El Paso.

Under the agreement, Chihuahua will maintain security measures Campos Galván enacted after her 2011 election.

“Last month, Campos Galván met with CBP Commissioner Chris Magnus and U.S. Ambassador to Mexico Ken Salazar in Washington, D.C.,” reports The Texas Tribune. “In the meeting, she told them her administration installed cameras with facial recognition and license plate reading technology to monitor vehicles entering Juárez, where drug cartel violence has plagued the city for years. She also said she ordered the move of the police headquarters from the state capital to Juárez.”

Abbott said during the press conference that the plan was “the best border security plan that I’ve seen from any governor from Mexico.”

In a press release, Abbott’s office said the memoranda or understating was similar to the one reached with the governor of Chihuahua.

“These MOUs with the State of Chihuahua and the State of Coahuila signal yet another historic step taken by the State of Texas to solve the border crisis, keep our communities safe, negotiate with our partners in Mexico, and fill in the gaps left by the inaction of the Biden Administration,” said Governor Abbott. “Until President Biden decides to fulfill his constitutional duty to secure the border, we will continue to do whatever it takes to protect the safety and security of all Texans.”

“Entrepreneurs and the transports from Nuevo Leon talked to me to do something to increase again the revisions, the checkpoints going on around the border,” Governor Garcia said during a joint press conference.

The Texas governor agreed to end the increased inspections at the Colombia Solidarity Bridge after Garcia agreed to increase security efforts on the Mexican side of the border. The agreement went into immediate effect.

Abbott ordered border authorities to increase their inspection of commercial vehicles at the borders after the Biden administration announced it would end Title 42 next month. 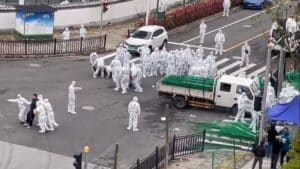 Scenes of Protest Persist Amid 'Zero-COVID' Lockdowns in China