Two personal bank accounts were frozen after over $1 million in support of the Freedom Convoy in Canada were paid into them.

Through a spokesperson, Toronto-Dominion (TD) Banks said that it had appealed to the Ontario Superior Court of Justice on Feb. 11 to take the funds. The bank said it wanted to return the funds to its donors “who have requested refunds but whose entitlement to a refund cannot be determined by TD,” per Reuters.

One account received $1 million which TD froze after it said it could not determine the money’s origin. Approximately $100,000 was transferred to the second account through multiple transfers.

Keith Wilson, an attorney for the Freedom Convoy, told Reuters in an email that TD was “on notice that their actions are improper and disappointing.”

Wilson wrote the movement will seek a court order that will compel TD to release the money to a new not-for-profit organization. He added that the convoy is “also going to be taking the Ontario government to court to seek an immediate lifting of what we consider to be an unlawful order.”

“The country’s anti-money-laundering agency told a parliamentary committee on Thursday that it has not seen a spike in suspicious transaction reporting from the banks in recent weeks,” per Global News.

Truckers across Canada participated in a convoy that ended in Ottawa on Jan. 22, the nation’s capital, to protest the government’s COVID-19 restrictions and vaccine mandates. The truckers have blocked the streets in the downtown area near the nation’s parliament.

In early February, GoFundMe took down the movement’s fundraising page after it received over $10 million in donations.

Supporters of the protest turned to Boston-based Christian organization GiveSendGo, which has refused to comply with a Feb. 10 order from the Ontario Superior Court to freeze all donations for the truckers.

Canadian are already noticing the impact of the protests. A judge ordered a ban on honking in downtown Ottawa almost two weeks into the protest. Food shortages are being reported across the country after blockades at border crossings vital to shipping routes were implemented, including on a bridge linking Detroit, Michigan to Windsor, Ontario. Each month, an average of $900 million in food supplies are transported across the bridge. 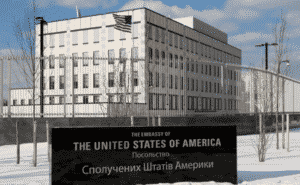