A judge has banned protestors in downtown Ottawa from honking for the next ten days.

The order comes 11 days after truckers arrived in the nation’s capital following cross-country convoys that began at both coasts. Known as the Freedom Convoy, the grassroots movement opposes vaccine and mask mandates imposed on the trucking industry and private citizens in the wake of the COVID-19 pandemic.

Justice Hugh McLean of the Ottawa Superior Court said on Feb. 7 that his order would not prevent protestors from demonstrating.

“Tooting a horn is not an expression of any great thought I’m aware of,” McLean said.

The order went into immediate effect. Horns are banned for 24 hours a day from the area north of the Queensway, which carried most of the city’s east- or west-bound traffic.

An injunction request came out of the class action lawsuit filed on behalf of a 21-year-old government employee by lawyer Paul Champ.

At a hearing, Champ said the horns can cause permanent hearing loss by blasting at 105 to 120 decibels for prolonged periods of time.

“Every hour this goes by, there is harm to the people of Centretown,” he said.

Protest organizers have signaled their intention to stay as long as necessary to achieve a repeal of COVID-19 restrictions.

In the streets surrounding Parliament, the protestors have “cooked food, set up bouncy castles, held impromptu dance parties, and played street hockey,” per The Week.

Mayor Jim Watson declared Ottawa was in a state of emergency on Feb.6. He said the protest, which police have said cost the city $800,000 a day, was a “serious danger and threat to the safety and security of residents.”

The movement raised over $8 million to cover the expenses of those involved, including the cost of fuel, food, and lodging. GoFundMe announced over the weekend it would not release the money to the organization after calling the protest “an occupation, with police reports of violence and other unlawful activity” in a statement.

The movement then raised $2.1 million on the Christian fundraising platform GiveSendGo.

“We are a peaceful country that has helped protect nations across the globe from tyrannical governments who oppressed their people, and now it seems it is happening here,” Freedom Convoy organizers wrote in their fundraising appeal.

They added, “It’s our duty as Canadians to put an end to [these] mandates. … It is imperative that this happens because if we don’t our country will no longer be the country we have come to love. We are doing this for our future generations and to regain our lives back.” 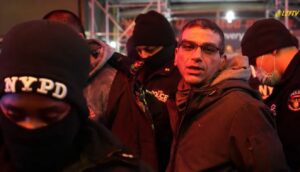