At least ten anti-mandate protesters were arrested after storming the AMC Empire 25 movie theater in Midtown on Monday evening.

An independent journalist who was filming the demonstration was also taken into custody, according to reports on social media.

The demonstrators reportedly stormed the New York City theater at about 6:30 p.m.

I just got off the phone with LeeroyPress who said that he, and everyone else arrested at AMC were charged with trespassing. According to LeeroyPress he was told by two officers that it was ok for him to film inside the theater.

The journalist, known as Leeroy Press, was also recently suspended from Twitter. He has been live streaming and filming many of the anti-mandate actions in the city. Another video journalist and friend of his, “Luke2Freedom,” posted that Leeroy had been charged with trespassing after law enforcement did not accept his credentials.

“I just got off the phone with LeeroyPress who said that he, and everyone else arrested at AMC were charged with trespassing. According to LeeroyPress he was told by two officers that it was ok for him to film inside the theater,” Luke tweeted. “He said that the issue with his arrest arose when Inspector Robert O’Hare asked him for credentials. He said that after credentials were shown, inspector O’Hare said they were not the ones he was looking for and decided to go through with his arrest.”

Leeroy Press claims that they have proper national credentials.

“Activists against mandates attempt to watch a movie at a movie theater that’s for the [vaccinated] only. The NYPD was called on them to remove them. The NYPD arrived and they are now waiting on the NYPD srg unit to arrive ( riot cops ),” Leeroy posted on his Instagram account during the protest.

During the protest, which included a sit-in, the crowd was chanting “My body, my choice. The vaccine you won’t force.”

In a post following his arrest Leeroy Press wrote, “today I and another member of the press @eastghostreports was targeted and arrested by inspector o’hare from the NYPD while I was filming a sit In. Before I was targeted I was given permission by 2 other NYPD Officers to film. Inspector o’hare’s excuse for arresting me is I wasn’t the right kind of press. Fire this cops [sic] NOW !”

The theater currently requires proof of vaccination for all guests over the age of five.

“Area mandates require proof of vaccination for all guests ages 5 and older. Please be prepared to show your proof of vaccination documentation and photo ID when you present your ticket to the ticket taker,” the theater’s website states. “Masks are recommended for everyone. Guests who have had a vaccine shot but who are not yet FULLY vaccinated are asked to wear a mask throughout the building. Masks may be removed while actively enjoying food and drinks.” 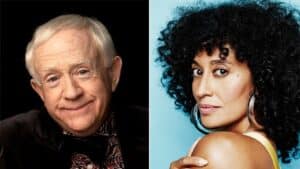