Portia Odufuwa has been prohibited from owning a gun since 2018

Police have released the identity of the woman who fired a gun inside Dallas Love Field Airport.

Portia Odufuwa, 37, was charged with aggravated assault against a public servant.

The suspect was using a gun that was not registered to her. Dallas police Chief Eddie García said at a press conference on July 27 that Odufuwa had attempted to buy a gun in Texas on two different occasions since 2016 but was denied due to outstanding traffic warrants in New Mexico. García said the suspect has been prohibited from owning a gun since 2018.

Odufuwa arrived at the airport around 11 AM on the morning of July 25, changed into a hoodie in the bathroom, then walked to the ticketing counters where she could be heard ranting about her husband cheating on her and blowing up the airport. Then she opened fire, aiming several shots at the ceiling and, at one point, aiming her weapon at a bystander and a police officer.

The officer, Ronald Cronin, who García says has served for 15 years, gave multiple verbal commands to Odufuwa to drop her gun before returning fire eight or nine times. The woman was hit in the leg and underwent surgery at Parkland Memorial Hospital. She is reported to now be in stable condition.

“I’ve said time and time again to our men and women and to our recruits that we need to be both guardian as well as warrior. … That is what Officer Cronin was,” García said, per Axios Dallas. “He didn’t hesitate in engaging, managing to give commands to potential victims, attempting to guide them to safety even after being involved in the most traumatic scenario.”

“I know his actions saved lives and prevented more injuries,” the chief added.

Law enforcement has released videos of the chaotic scene at the airport, showing travelers running for cover.

The shooter’s motive is still unclear.

At the time of her arson arrest, Odufuwa told police that she was “God’s prophet” and that she was married to singer Chris Brown. In 2020, she was taken into custody by police at Love Field Airport and taken to a mental health evaluation.

“Odufuwa has cycled through courts in Dallas and Collin counties in recent years and her mental health was frequently at the forefront of those cases,” reports the Dallas Morning News. In 2021, after Odufuwa was charged with a misdemeanor, “a Dallas judge ordered her to outpatient treatment, meaning she was released from jail and was supposed to report for services like counseling. But she failed to show up, prompting her re-arrest.”

That case was dismissed in November.

The identity of the person who dropped Odufuwa off at the airport has not been revealed.

No travelers or airport employees were injured during the event. 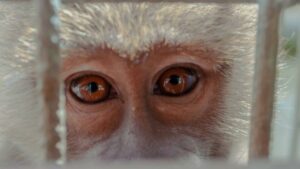 Roving Gang of Wild Monkeys Terrorizing the Streets of Japan