Camp Constitution, whose Christian Flag was rejected by the city in 2017, sued for discrimination

The nation’s highest court found that Boston violated national free speech laws when it denied a request to fly a Christian flag outside of its city hall.

The court offered a unanimous opinion on May 2 stating the city had violated the Constitution when it told Camp Constitution it would not fly its flag. Boston officials told the Christian groups that flying the flag to mark Constitution Day 2017 would be a government endorsement of a religion.

Harold Shurtleff, the leader of Camp Consitution who was once a part of the John Birch Society, sued the city for discrimination.

The court’s opinion was written by retiring Justice Stephen Breyer, who noted the city government’s “lack of meaningful involvement in the selection of flags or the crafting of their messages.”

“We conclude that, on balance, Boston did not make the raising and flying of private groups’ flags a form of government speech,” the opinion for Shurtleff v City of Boston reads. “That means, in turn, that Boston’s refusal to let Shurtleff and Camp Constitution raise their flag based on its religious viewpoint ‘abridg[ed]’ their ‘freedom of speech.'”

Boston has approved 284 consecutive applications for flags to be flown on one of the three flagpoles outside of its City Hall which displays the U.S., Massachusetts, and city flags.

Camp Christian’s flag is a white banner with a red cross on a blue background in the upper right corner.

During oral arguments, lawyers for the plaintiffs and defense debated if flag flying was an act of government authority.

“Government speech occurs if — but only if — a government purposefully expresses a message of its own,” Alito wrote.

Kavanaugh said the city had misunderstood the Establishment Clause.

“Under the Constitution, a government may not treat religious persons, religious organizations, or religious speech as second-class,” Kavanaugh wrote.

Prior to the court’s ruling, Boston’s city government said they were considering revising the rules regarding the flagpoles. Private groups would no longer be able to apply to have their flags flown, per ABC News.

Also included in Breyer’s opinion was an evaluation of the architectural style of the Boston City Hall. The justice wrote the “brutalist style” of the 1960s building was once deemed the world’s Ugliest Building. 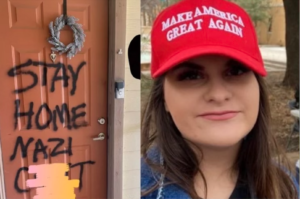