The United States Supreme Court rejected former President Donald Trump’s appeal to uphold his right to executive privilege amid an investigation into the events of Jan. 6.

Trump appealed to the Washington D.C. appeals court decision which ordered him to turn over documents requested by the House Committee investigating Jan. 6. The request was made as part of the probe into the final weeks of Trump’s term to uncover its connection to the security breach at the capital that halted the official verification of the 2020 election.

“A former President must be able to successfully invoke the Presidential communications privilege for communications that occurred during his Presidency, even if the current President does not support the privilege claim,” Kavanaugh wrote.

The Supreme Court officially declined to hear Trump’s appeal in January 2022, ending his legal team’s effort to prevent the committee from gaining access to the documents.

None of the justices offered a comment or explanation.

Trump’s claim to executive privilege was rejected by President Joe Biden, who ordered the National Archives and Records Administration to turn over the relevant White House Visitor log last week. The Biden administration said in an October statement that honoring Trump’s executive privilege regarding the documents was “not in the best interests of the United States.”

The documents requested by the committee include call logs, emails, schedules and other files relevant to an inquiry into Jan. 6, 2021.

“The ruling, though, targeted a specific group of documents, which means Trump could return to court to challenge the release of other documents that did not fall under the order,” reports UPI.

The House Committee is seeking to determine what role Trump played in the clash that occurred between Capitol police and protestors.

Committee members have issued a number of subpoenas to Trump campaign staffers, alternative electors, and presidential advisors. In November, Steve Bannon was held in contempt for refusing to comply with a subpoena from the Jan. 6 Committee.

Committee members have maintained their determination to compel Trump to comply.

“The schedule has always been a challenge to accomplish what we need to accomplish in the timeframe,” Rep. Pete Aguilar (D-Calif.), one of the seven members, said in a statement. “We’re committed to do it and we’ll use every available tool to get there.”

Millett wrote in her 68-page opinion that “access to this subset of presidential communication records is necessary to address a matter of great constitutional moment for the Republic.”

“Benjamin Franklin said, at the founding, that we have ‘[a] Republic’—’if [we] can keep it.’ The events of January 6th exposed the fragility of those democratic institutions and traditions that we had perhaps come to take for granted,” Millett wrote. 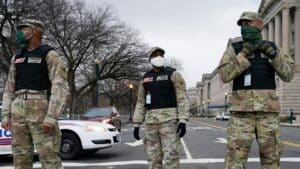