The ACLU brought a lawsuit against the Carter Day School in 2016, arguing the dress code 'reflected antiquated gender stereotypes'

A case involving a North Carolina charter school that mandates female students to wear skirts is being considered by the United States Supreme Court.

The justices have asked the Biden administration if the court should take on the case, which involved the publicly-funded Charter Day School in Leland, North Carolina.

Carter Day School is operated by a private educational management company with students between kindergarten and eighth grade. The school focuses on “traditional values” with rules differentiating between the treatment of boys and girls. In addition to requiring female students to wear skirts as part of the dress code, the school requires girls to be treated “courteously and more gently than boys.”

Outside of physical education classes, girls were required to wear skirts, jumpers, or skorts.

Baker Mitchell, the charter school’s founder and president, says the school’s rules “preserve chivalry.” Mitchell considers chivalry to be a form of decorum where women are viewed “a fragile vessel that men are supposed to take care of and honor.” The businessman said chivalry helps preserve “respect among young women and men.”

In March 2016, the American Civil Liberties Union filed a lawsuit against the school on behalf of a group of female students who opposed the skirt requirement. The ACLU said the school’s dress code “reflected antiquated gender stereotypes, intentionally sending the message that girls are not equal to boys.”

“We’re having to tell our daughters, even though this is what they’re teaching you, this is not the way the world works anymore,” said former CDS student Bonnie Peltier in 2018.

Attorneys for the school said the dress code was part of the traditional values the institution promotes and “is in place to instill discipline and keep order,” per NDTV.

Eastern District of North Carolina Judge Malcom Howard ruled the the dress code violated the girls’ constitutional right. Howard said the requirement made girls “pay constant attention to the positioning of their legs during class, distracting them from learning, and has led them to avoid certain activities altogether, such as climbing or playing sports during recess, all for fear of exposing their undergarments and being reprimanded by teachers or teased by boys.”

Howard said the school failed to demonstrate a connection between its mission and the skirt requirement.

“They argue that taking away the ‘visual cues’ of the skirts requirement would hinder respect between the two sexes,” said Howard.

The school appealed the decision, arguing Howard’s ruling was an “existential threat” to an effort to increase educational alternatives for parents. The school argued it was not in violation of the 14th amendment because it is a private entity as it is not operated by a state school district.

The Fourth U.S. Circuit Court of Appeals in Virginia ruled 10-6 in 2021 that the school was a state insitution because it is required by the government to provide free, universal education. The Appeals court also found the policy violated the students’ 14th amendement rights and was based on gender stereotypes.

Judge A. Marvin Quattlebaum Jr and five other judges opposed the majority’s decision. Quattlebaum said it would restrict “innovative alternatives to traditional public education” and that CDS’’s “chivalric approach should neither be legally banished from the educational system, nor should it be legally imposed.”

CDS then appealed to the nation’s Supreme Court, arguing in Septmeber that the lower court’s ruling “undoes the central feature of charter schools by treating their private operators as the constitutional equivalent of government-run schools.”

The Supreme Court has asked US General Elizabeth Prelogar for a brief summarizing President Biden’s administration’s perspective on the case.

CDS’s attorney Aaron Streett told Reuters that the move was a “postive sign” because “the court views this as an important case that may merit further review.” 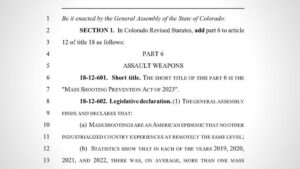