Colorado state officials are planning to introduce a gun control bill that bans assault weapons, according to a leaked draft of the legislation published by a gun rights lobbying organization.

Sixteen pages of a draft version of the bill — with the bill’s topic formally listed as “Prohibition Of Assault Weapons In CO” — were published in a Twitter post by the Rocky Mountain Gun Owners, an organization with more than 200,000 pro-Second Amendment grassroots activists.

It is unclear how the draft version of the legislation was obtained, but the sponsors listed are State Rep. Andrew Boesenecker, State Rep. Elisabeth Epps, and State Sen. Rhonda Fields.

The bill would prohibit an individual from “possessing, manufacturing, importing, purchasing, selling, offering to sell, or transferring ownership of an assault weapon,” according to the draft.

Should the bill pass, current owners of firearms that state officials classify as “assault weapons” may be grandfathered in and excluded from the ban if certain conditions are met, including maintaining paperwork showing legal ownership prior to the effective date of the bill, and securely storing the firearm. It is unclear how officials intend to enforce storage rules.

The Rocky Mountain Gun Owners said in a subsequent post that they will sue to stop the legislation and anticipate costs exceeding one million dollars.

Taylor D. Rhodes, Executive Director for the organization, posted a video to Twitter saying that state officials have a suite of four separate bills lined up which aim to severely restrict who can carry firearms. 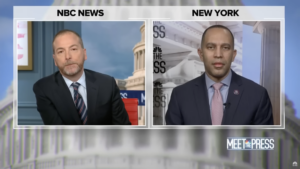