An artist has placed a coffin on former President Donald Trump’s Walk of Fame star to protest opposition to mask mandates and vaccines.

The life-size white coffin was created by “Plastic Jesus” a Los Angeles-based activist and street artist. His website describes him as specializing in “bold stencil and installation work, inspired by world news events, society, the urban environment, culture and politics.”

A video of the coffin was posted to the British-born artist’s Instagram account with the caption “today’s street installation: The USA Freedom Box – my body my choice. Hollywood Blvd 10/07/2021. All the freedom you will ever need!” He also included a variety of COVID-19 related hashtags.

In an interview with the artist posted to Twitter by reporter Eric Levai, “Plastic Jesus” said that “it’s really kind of a blow at the people saying vaccines and masks are impeding their freedoms.”

“Once you’re dead and you’re in a coffin, you don’t have any worries about losing freedoms.”

“I wanted to do something because the anti-mask, anti-vaccine, anti-science mob has become so vocal,” the activist and artist said.

The artist also erected a six-inch tall border wall around the star in 2016 during the election season. 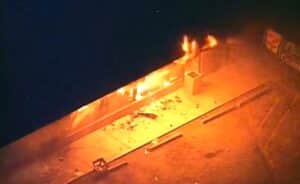