'We may have lost a battle here today, but we’re not going to lose this war,' Bannon said outside the courthouse

Steve Bannon was convicted of two contempt charges stemming from his refusal to cooperate with the house select committee investigating the events of Jan. 6.

Bannon is the former executive chairman of Breitbart News who served as an advisor to President Donald Trump.

The conviction comes after a four-day trial during which the Justice Department argued Bannon believes he is “above the law” and showed he “chose to show his contempt for Congress’ authority and its processes” by refusing to comply with the Jan. 6 committee’s subpoenas.

The committee subpoenaed Bannon in September in order to compel him to testify during a deposition and to turn over requested documents.

Robert Costello, who represents Bannon, sent a letter to the committee on Oct. 13 informing the members that Trump was “exercising his executive privilege” and that one of his attorneys had advised Bannon not to testify.

“That is an issue between the Committee and President Trump’s counsel and Mr. Bannon is not required to respond at this time,” Costello wrote.

The Jan. 6 committee voted to hold Bannon in contempt the following week. He was indicted on Nov. 12 and surrendered himself to federal custody on Nov. 15.

The Jan. 6 committee held public hearings during the scheduled trial prompting Bannon’s defense team to make multiple requests for a delay. The lawyers argued the hearing could influence the jury. Judge Carl Nichols denied the requests.

Bannon had offered to testify in June although the Justice Department said it was really a “last-ditch attempt to avoid accountability,” per NBC News.

Evan Corcoran, Bannon’s attorney, argued in court that the deadline on the subpoenas were placeholders as both sides were negotiating terms of cooperation. He accused the committee of attempting to “make an example of Steve Bannon.”

Ultimately, Bannon’s team elected not to present a defense or call witnesses.

“That decision stemmed from previous rulings by Nichols that barred the defense from advancing several arguments, including that Bannon ignored the subpoena on the advice of his counsel or at Trump’s direction,” reports The New York Post.

“The overreaching by the government in this case has been extraordinary on every level,” David Schoen, another attorney for Bannon, told reporters on July 22. “But shame on this office, on the United States Attorney’s Office and the Department of Justice, for how far it went in this case.”

Speaking to the media outside of the E. Barrett Prettyman Courthouse, Bannon said of the jurors, “We respect their decision.”

“We may have lost a battle here today, but we’re not going to lose this war,” Bannon said, per CNBC. “I stand with Trump and the Constitution, and I will never back off that, ever.”

Bannon is the first of the 100 people subpoenaed by the Jan. 6 committee to be convicted on contempt of Congress charges. Former White House advisor Peter Narravo, who also refused to appear before the committee despite a subpoena, became the second person to be indicted in June.

Each count carried a minimum sentence of 30 days in jail although Bannon could be sentenced to up to two years behind bars. He could also be fined between $100 and $100,000. Sentencing is scheduled for Oct. 21. 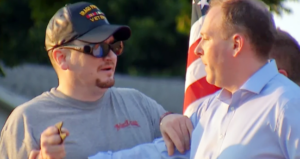