States with the Worst Unemployment Rate Have Democrat Leaders

New data from the U.S. Bureau of Labor Statistics shows the contrast in unemployment rates among states run by Democrats and those run by Republicans.

States with total Democrat leadership had the highest rates of unemployment. Nevada, California, New Mexico, New York, Connecticut, Hawaii, New Jersey, and Illinois fell to the bottom of the ranking. Each has over a 7% unemployment rate.

In 44th place was the District of Columbia with a 6.7% rate.

Some metropolitan areas are experiencing even higher unemployment, including an over 10% rate in both Atlantic City and Maui.

“On the contrary, out of the 20 states with the lowest unemployment rates, 17 are either completely led by Republicans or lean that way,” reports The Federalist. “Of the red states on the list, 25 saw an uptick in jobs since June. Idaho and Utah, both GOP-led states, both saw job numbers rise above the pre-pandemic numbers recorded in February 2020.”

Nebraska has the lowest unemployment rating of 2.3%, followed by Utah, South Dakota, and New Hampshire.

For the past year, federal unemployment benefits have been notably lucrative because of additional COVID-19 related relief funds.

“All pandemic aid programs for those experiencing joblessness are slated to expire at the federal level in two weeks. That includes Pandemic Unemployment Assistance for gig workers and freelancers, along with another federal initiative providing payments to people who maxed out state benefit,” reports Business Insider.

After over a year of shuttered business and staffing shortages, many political leaders regard ending the increased federal benefits as a necessary step in economic recovery.

“I’m done with extensions. The economy is coming back,” he said.

Independent Senator Angus King of Maine is also reportedly unlikely to back an additional extension of the federal aid program.

According to Forbes, President Biden encouraged states with higher-than-average jobless rates “to extend some of the federal government’s other enhanced benefits beyond early September, including expanding who’s eligible for unemployment and allowing jobless people to stay on unemployment rolls for more weeks.”

As of July, 8.7 million Americans were jobless and actively looking for work.

Without an extension, the federal government’s $300-a-week boost to unemployment checks will expire on Sept. 6. 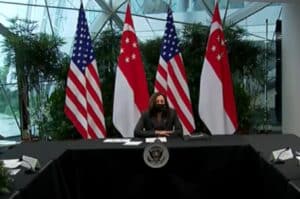