Stacey Abrams: 'It is Lethal to Be Pregnant in Georgia If You Are a Black Woman'

Georgia’s Democratic nominee for governor said pregnancy has fatal consequences for Black women in the state.

“It is lethal to be pregnant in Georgia if you are a Black woman.”

Under current Georgia law, abortion is prohibited after six weeks of pregnancy.

Georgia’s 2019 law was then challenged in the Superior Court of Fulton County on July 26.

“This extreme ban rooted in white supremacy will hurt so many and will disproportionately hurt Black women—who in Georgia are more than twice as likely as white women to die from pregnancy complications,” said Monica Simpson,  the Executive Director of SisterSong Women of Color Reproductive Justice Collective – one of plaintiffs on the lawsuit. “We are committed to our vision for reproductive justice for Georgians, in which everyone including Queer, trans and low-income people all have the freedom to decide to have children, to not have children, and to raise the families they have in thriving communities.”

The state of maternal health among Black women has been widely discussed following the 2020 death of George Floyd, which increased the national debate regarding systemic racism.

The National Institute of Health published a report in April of 2021 that said systemic racism is a “key factor” in “maternal death and illness.”

“The high burden of chronic conditions that contribute to Black women’s maternal illness and death reflects structural inequities they experience their entire lives – within and outside the health care system,” said Dr. Nicole Redmond of the Division of Cardiovascular Sciences at the NIH’s National Heart, Lung, and Blood Insititute, in the report.

Black mothers are also more likely to suffer from preeclampsia during pregnancy which can cause hypertension, antepartum hemorrhage, or cardiometabolic disease.

During her interview, Abrams blamed her Republican opponent, incumbent Governor Brian Kemp, for continued disparities in maternal health between black and white mothers.

The Democrat told donors in May that Georgia was “the worst state in the country to live in” — partly because the state was “number one for maternal mortality.”

Abrams also praised Kansas during the segment, which voted against a constitutional amendment that would have said the state does not guarantee the right to abortion. Abrams said the voters had “refused to allow women to be relegated to second class citizenship.”

“I’m proud of Kansas and I’m proud of America to take the steps we need to protect abortion care [in the] United States of America.”

Abrams concluded the segment by stating, “If Democrats across the country will run on the very real issues of safety, justice and real opportunity we can win across this country and we can win here in Georgia.” 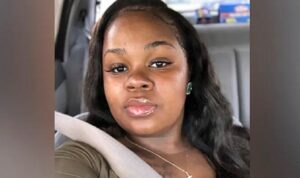