Abrams is currently running for governor

Stacey Abrams is standing behind disparaging comments she made about Georgia during a Democratic Party event over the weekend.

“When you’re number 48 for mental health, when we’re number one for maternal mortality, when you have an incarceration rate that is on the rise and wages are on the decline, then you are not the number one place to live,” she added during her May 21 remarks.

Abrams is currently running to become Georgia’s next governor. Her remarks come days before the state’s May 24 primaries.

During her 21-minute speech, Abrams criticized current Governor Brian Kemp’s COVID-19 response, the state’s adoption of permitless gun carry, and the legislature’s failure to expand Medicare to cover people with HIV, according to the Gwinnett Daily Post.

“Brian Kemp doesn’t care about our families or else he would be doing more to make sure that they were taken care of,” Abrams said. “Instead, in the midst of COVID, he passed a law to protect our companies but did nothing to protect our communities.”

She also addressed employment, education and diversity. The attorney promised to create 64,000 jobs “with the stroke of a pen” and that “if you finished in our high schools, you can go to our colleges if you are documented or not.”

Abrams told the crowd that “Georgia is comprised not just of communities that have been left out of the conversation,” but communities who “don’t even get a map to the table.”

At the end of her speech, Abrams declared, “I care for Brian Kemp. And that’s why I want him to have a nice long retirement from public service.”

“Stacey Abrams may think differently, but I believe Georgia is the best state to live, work, and raise a family,” the governor said.

Kemp is seeking his second term in office and faces former NFL player Herschel Walker and Senator David Perdue, who was endorsed by President Donald Trump, in the Republican primaries.

“GA may be #1 place for biz, but we’re #48 in mental health, #2 in uninsured. #1 in maternal mortality & new HIV cases, #9 in gun violence. For too many, Kemp’s Georgia doesn’t include them. Why? Because #KempDoesntCare,” she wrote.

Abrams owns two houses in Georgia and is worth an estimated $3 million, according to Fox News.

“We are the #1 state to do business in large part BECAUSE people like living here,” Mason wrote on Twitter. “Can’t imagine that would have been the case (esp during Covid) if she were at the helm.” 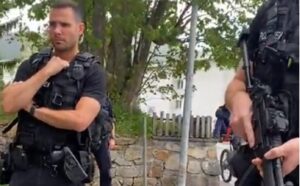