'Spider-Man: No Way Home' is the Second Largest Movie Opening in History

Spider-Man: No Way Home has now taken its place as the second-biggest weekend opening in box office history, just behind Avengers: Endgame.

Amid the surge in the Omicron variant of COVID and a revival of health and wellness fears, Spider-Man: No Way Home shattered pandemic-era records. The movie now holds the title for the second-biggest opening weekend ever — a monumental feat in the face of today’s economy and reduced foot traffic into theaters worldwide.

The third of the Tom Holland Spider-Man reboot exceeded estimates and surprised onlookers with its incredible return this past weekend. According to Sony Pictures on Monday, the movie raked in $260 million in North America. It’s the best opening weekend ever for a Spider-Man film and the largest opening weekend of a movie in December.

The record-breaking opening was an overdue win for the entertainment world, which has struggled throughout the pandemic. Before this week’s Spider-Man debut, no film opened above $100 million during the pandemic.

“This weekend’s historic Spider-Man: No Way Home results, from all over the world and in the face of many challenges, reaffirm the unmatched cultural impact that exclusive theatrical films can have when they are made and marketed with vision and resolve. All of us at Sony Pictures are deeply grateful to the fabulous talent, both in front of and behind the camera, that produced such a landmark film,” said Tom Rothman of Sony Pictures, in a statement to the Associated Press on Monday. 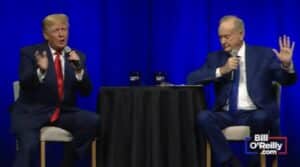 WATCH: Trump and O’Reilly Get Booed After Telling Audience They Got Booster Shots