South Carolina Governor Says 'Marriage Should Be Between Man and Woman'

The incumbent was discussing marriage while taking part in a pre-election debate and expressed his willingness to support South Carolina’s former ban on same-sex marriage. The ban was overturned in 2015 when the Supreme Court ruled gay marriage is a constitutionally protected right as part of Obergefell v. Hodge.

“Maybe I’m old fashioned, but I think marriage ought to be between a man and a woman — just like I think that boys ought to play in boy sports and girls ought to play in girl sports,” McMaster said, per NBC News. “But, I mean there’s — you have to have some common sense in this arena, which seems to be changing all the time. But I think our traditions are strong and for a reason.”

McMaster signed the Save Women’s Sports Act into law in May following its passage by the state legislature.

McMaster went on to say that while the court had ruled gay marriage is constitutionally protected “it is not allowed under state law” and that he would “follow state law whatever the state law is.”

When the Supreme Court struck down federal abortion protections on June 24, Justice Clarence Thomas suggested the court should revisit other landmark decisions – including Obergefell v. Hodge.

His comments alarmed some LGBT advocates, who have urged the federal government to codify same-sex marriage protections.

The governor’s Democratic opponent, former Representative Joe Cunningham, told the audience that “McMaster has been leading South Carolina into the 1950s since the 1980s.”

“We have politicians that have been in government so long and have become so calcified in their beliefs and Governor McMaster has been a politician literally longer than I’ve been alive, and he’s been taking our state backwards the entire time,” added the 40-year-old.

McMaster countered, “I don’t care who you love or don’t love or who you want to live with or what you want to do… That’s your business. But I think marriage is a special institution and that designation ought to be reserved between a man and a woman.”

The 75-year-old previously served as South Carolina’s attorney general from 2002 to 2010 and was elected lieutenant governor in 2014. Following Niki Haley’s appointment as United Nations Ambassador, McMaster took over as governor in January of 2017. He won his first full term as governor in 2018.

The most recent poll, released in early September, indicates McMaster leads Cunningham by 6%. 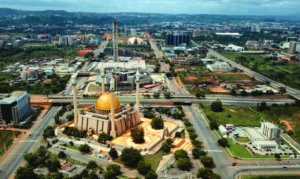 US Evacuates Diplomats' Families from Embassy in Nigeria