The US women's gymnastics team had been favored to win gold

Gold medalist Simone Biles withdrew from the Tokyo Olympics to the shock of gymnastic fans across the globe.

Biles is widely regarded as the best gymnast in the sport’s history. She has five Olympic medals and secured her seventh national title at the 2021 U.S. Gymnastics Championship.

“[She] left the competition after struggling to land her dismount on vault,” reports USA Today. “Biles was visibly upset after her landing on the night’s first event and talked with one of her coaches, Cecile Landi, and team doctor, Marcia Faustin, before pulling out from the uneven bars event.”

In an Instagram post after preliminary trials yesterday, Biles wrote “I truly do feel like I have the weight of the world on my shoulders at times. I know I brush it off and make it seem like pressure doesn’t affect me but damn sometimes it’s hard hahaha!”

The 24-year-old discussed working with a sport psychologist to manage her anxiety in an interview with Health Magazine.

“For a while, I saw a psychologist once every two weeks,” says Biles. “That helped me get in tune with myself so that I felt more comfortable and less anxious.”

The gymnast also said that if she could, she would tell her younger self, “To not be so stubborn and to be a little bit happier — to know that it’s not over just because something happens in one day. You can keep pushing.”

“The ROC’s gold is the first in the women’s team event since the 1992 Barcelona Olympics. [The] victory also secured a famous double for the ROC after the men won gold in Monday’s team event,” per CNN.

Officially, Russia is not permitted to compete at the Tokyo Olympics. The nation was banned after being found guilty in 2017 of a state-sponsored doping scandal. The Russian government denied helping athletes illegally enhance their performances.

The punishment included being barred from the 2018 Winter Olympics in Pyeongchang, South Korea and from competing as a country in other competitions, such as world championships. In 2019, the World Anti-Doping Agency said Russia had been covering up drug test results and subsequently banned them from the summer Tokyo Olympics.

However, Russian athletes are competing in the Olympics under a different acronym — the R.O.C.

“The Russian Olympic Committee is represented by a total of 335 athletes in Tokyo [and] all ROC competitors are athletes who have been able to prove they were not involved in the doping scandal,” explains the BBC. “They’re allowed to take part as long as they perform under a different team name and aren’t allowed to have the Russian national anthem played and the Russian flag won’t be flown if they win gold.”

They are permitted to wear their national colors, but can only have the term ROC on their uniforms. If the word ‘Russia’ appears on any piece of apparel, the phrase “neutral athlete” must also be included.

The ban will be lifted in December of 2022 provided Russian pays the WADA’s fine. 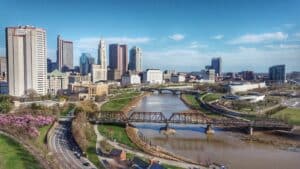 Democrats Want to Rename Over 1,000 Rivers, Mountains and Places With 'Racist' Names