Simone Biles Says She Is 'Very Much Pro-Choice'

On Monday, Olympic gymnast Simone Biles revealed she supports abortion because the “foster care system is broken [and] adoption is expensive.”

“I already know this is going to start the biggest argument & may even lose followers BUT, I’m very much pro-choice,” Biles’ said in an Instagram post. “Your body. Your choice.”

She continued: “Also for everyone gonna say ‘put it up for adoption’ it’s not that easy & coming from someone who was in the foster care system TRUST me [the] foster care system is broken & it’s TOUGH. Especially on the kids and young adults who age out.”

.@Simone_Biles says she’s “very much pro-choice” as “someone who was in the foster care system.” pic.twitter.com/z5I8E0Gsxf

Live Action president and pro-life advocate Lila Rose responded to Biles’ comments on Twitter, addressing Biles’ suggestion that ending the lives of foster care children before birth is justified because their lives would be difficult.

“Our modern mindset is so broken & cruel: ‘My life can overcome great odds but others’ can’t.’ ‘Born people deserve to live but not little unborn people.’ ‘Foster care and adoption can be broken so let’s support killing off would be adoptees before birth.’”

After facing backlash, Biles took to Twitter to walk back her original comments, saying her words had been “misconstrued.”

“DO NOT misconstrue my words. That is not at all what I implied. I did NOT say I support to abort rather than to put them through the foster care system. What I did imply is that you should not control someone elses [sic] body/decision. Let’s be real what you care about is control,” Biles wrote.

“I have forever & will continue to support foster kids. AS I WAS ONE. I’ve been an advocate for foster kids and the system but you wouldn’t know that because you don’t follow me, you just like to open your mouth,” she continued. “also if you have a fake account don’t even talk to me. Y’all piss me off to no end. I’m done because you’ll twist my words however it feels fitting to spew hate. Also if anyone is seeing this just know I support you doing whatever feels fitting for YOU.”

Biles’ comments came after she drew media attention for her controversial decision to quit one of the events at the Olympics “in order to focus on her mental health.”

In an ESPN interview, Biles explained that she quit because she was not “having as much fun.”

“I just don’t trust myself as much anymore,” Biles said. “I don’t know if it’s age, I’m just more nervous when I do gymnastics. I feel like I’m also not having as much fun. And I know this Olympic Games, I wanted it to be for myself. I’m still doing it for other people.”

Gymnast Suni Lee, Biles’ teammate, praised her for quitting, saying that “we are WINNNERS in our hearts,” a victory which does not require participation, as opposed to winners in reality, a victory which requires winning.

“Never been prouder to be apart [sic] of such an amazing team with an amazing group of girls. We stepped up when we needed to and did this for ourselves. We do not owe anyone a gold medal, we are WINNERS in our hearts,” Lee wrote.

never been prouder to be apart of such an amazing team with an amazing group of girls. we stepped up when we needed to and did this for ourselves. we do not owe anyone a gold medal, we are WINNERS in our hearts. 🤍 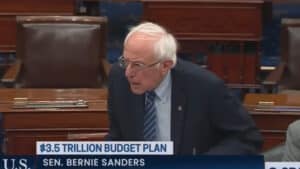 BERNIE SOUNDS OFF! Sanders Exclaims Droughts Are Hitting ‘Every Country on Earth’