‘Fauci knew,’ Navarro told Timcast. ‘If he had simply told us…we would have cracked down on China.’

Dr. Peter Navarro, a senior official in the Trump administration, claims Anthony Fauci’s gain-of-function research at the Wuhan Institute of Virology is responsible for leaking coronavirus, a disease that China intentionally spread “to ensure a pandemic.”

Navarro’s new book, “In Trump Time: My Journal of America’s Plague Year,” details his personal account of what took place behind the scenes at the White House in 2020.

The book opens with a meeting between Trump and high-ranking members of the Chinese Communist Party (CCP) on a stage in the east wing on Jan. 15, 2020. The reason for the meeting was to co-sign a historic trade deal with China.

“The boss [Trump] is at the top of his game,” Navarro recalled in a Timcast interview available exclusively to members. “Everybody … thinks he’s a lock for re-election. There’s exuberance about the trade deal. [But] I’m sitting in the audience in a cold sweat.”

“I’m wondering, as I look up on that stage … What do these Chinese Communists know that they’re not telling us?” Navarro said. “Could they be infected? And if so, why are they sitting so close to the president? And by the way, why did they shake my hand at the trade dinner last night? But most importantly … I was thinking to myself, could this be a bioweapon that was designed to intentionally take out the only president [who] had ever stood up to [the CCP]?”

Now, nearly two years after that meeting, Navarro knows who’s responsible for the pandemic that would radically disrupt human life on earth: Dr. Anthony Fauci and the CCP.

“Fauci overturned the ban on gain of function experiments that the Obama administration put in [and] he did it behind our backs in 2017,” Navarro said. “And he did it under the assumption — and this was pure hubris — that labs never have leaks and that [the] Chinese military would never use it as a bioweapon.”

In Navarro’s view, the bigger problem is that Fauci didn’t disclose critical information to the Trump administration:

“The important thing to understand here is what Fauci knew and didn’t tell us at the time. Everybody in the room knew that the virus came from Wuhan. Everybody in the room knew that it had popped up near the Wuhan lab, but what none of us knew then was that Fauci had funded that lab with American taxpayer money. … And worse, he engaged in a coverup to make sure that we got off his scent.”

Navarro said Fauci had been warned that the virus was genetically engineered early on:

“This is important because if he had simply told … the president, ‘Hey look. I’ve got some bad news for you. I think this is probably from the lab, it may be a weapon, [it’s] certainly genetically engineered’ — you know what the difference would have been? We would have cracked down on China and we would’ve gotten the original genome of the virus, you know. What that would have allowed us to do, it would allow us to craft a true vaccine. … [It’s] a lie of omission. He should be in jail and out of government.”

Meanwhile, the alleged cover-up provided an ideal opportunity for the CCP, which “intentionally seeded and spread [the] virus around the world to ensure a pandemic,” Navarro said.  “Whether it intentionally or accidentally escaped from the lab, if you look at China’s behavior, there’s no question that it intentionally allowed the virus to seed and spread around.”

In what he calls “the most important chapter” in his book, Navarro, who has a PhD in economics from Harvard, explains his effort to establish a presidential commission to analyze the costs and origins of the pandemic. He also wanted a thorough examination of whether or not the pandemic advanced the CCP’s strategic agenda.

“To this day, we need that,” he told Timcast. “The Chinese allowed it to seed and spread. … And yes, the cost of that is over $20 trillion. … That’s a year’s worth of American GDP and yes, Communist China took out president Trump and they have been able to advance their agenda in Hong Kong and Taiwan and their Belt and Road Initiative. … They have suffered, but relative to America, they’ve advanced their position.” 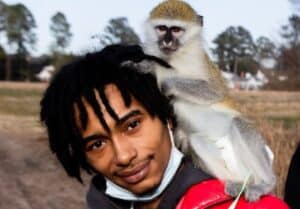 Popular Animal TikToker Rico Exotic Raided, Told He Needs to Leave Ohio or They Are Taking His Monkey (VIDEOS)