Popular Animal TikToker Rico Exotic Raided, Told He Needs to Leave Ohio or They Are Taking His Monkey (VIDEOS)

Popular animal TikToker and YouTuber Rico Exotic has been raided by law enforcement and told that he needs to either leave the state or surrender his grivet monkey, Mike, within 30 days.

The 22-year-old, whose real name is Eric (he keeps his last name private) just bought his first home, which is in Euclid, over the summer. He maintains that he spoke to the Ohio Department of Agriculture and state Department of Fish and Wildlife to make sure the primate was legal there before purchasing his home.

Eric’s channel vlogs his life with his rescue raccoon, grivet, ring-tailed lemur, and coatimundi. His popularity has skyrocketed in recent months and he now has nearly two million followers on TikTok. The videos he has created have amassed over 35 million “likes” on that platform alone.

Speaking to Timcast, Eric explained that on November 21, the ODA kicked down his door. As they were handcuffing him, they told him that they were going to take his monkey — which he refers to as his “son.”

“He was eight weeks old when I first got him, he’s a little over a year old now,” Eric explained. “They told me that I had a couple weeks to get the monkey out of the state or they are going to come confiscate him. “So, I have to leave my new home or they are going to come and take him. I know he may just look like a monkey to everyone else, but to me he is more than that. He’s my son. My own flesh and blood. The child I never had.” 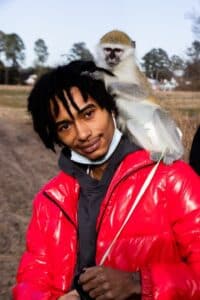 Eric added, “now I’m trying to figure out my next move, my next location, my next home — my next piece of mind so I can have safety and love my animals in peace.”

After raiding his home, the officer serving him began singing his song “Follow Me” and talking about how much of a fan of his music he is.

Eric also posted a surveillance video capturing the moment that police broke down his door.

In a subsequent video, Eric pointed out that all of his animals are registered with the USDA. He was previously visited by law enforcement over his rescue raccoon — which had fallen through someone’s ceiling and was picked up by an exterminator, who gave it to him to rehab.

The social media star maintains that they did not inform him there was also a problem with having his primate during that incident.

The viral star was born in Cleveland, in what he has described as a “gang and drug-infested neighborhood.”

“I’ve seen 5 homicides with my own eyes , My childhood was not only just me fearing for my life on a daily basis but, protecting myself from bullies and other children who teased me for not fitting in. Over time through pressure, I was force to became a product of my environment for my own protection. My father was taken away from me and my family when I was at the age of seven due to incarceration,” Eric wrote in his GoFundMe fundraiser description. “Shortly after that I started losing close friends at the age of 13 to gang violence. Experiencing the hardship and violence around me sadly cause me to develop PSTD.”

Eric explained that during this time, the only thing that brought him peace and happiness was caring for orphaned stray wildlife.

“They give me a sense of hope and purpose. I know that caring of wildlife is very dangerous, but it is something I am very passionate about. Animals are more afraid of us then we are of them. They are hopeless and helpless in a world trying to kill them — which is how I felt as a child,” he wrote.

Eric told Timcast that his animals are almost a “medicine,” saying that they help him cope with his anxiety and PTSD as much as he tries to help them when they need it — much like a traditional emotional support animal.

In some of his most popular videos, Eric can be seen walking through the woods with his animals, unleashed. None of them attempt to escape or distance themselves from him — despite having the capability to do so. This apparent bond with the animals has led many to dub him an “animal whisperer.”

The Small Primate Rescue of Tennessee has offered to take Mike until Eric can move — and help Eric find a place where they will both be safe.

Speaking to Timcast, Michael Robison, the owner and founder of SPARTN explained the being ripped from their homes can be extremely traumatic to primates.

“The lack of clarity in guidelines, regulations, and consistency by the USDA and local Wildlife authorities lead to situations like this. SPARTN is working to create education and guidance for the future of care, regulations and protection of primates,” Robison said. “Not only are these situations traumatic to primate owners, but also to the primates who have emotional attachments to their owners. It’s akin to removing a child from a home forcefully when preference or situational politics come into play. This is why SPARTN had chosen to step in and help provide a place for Eric, Mike and all of his animal family.”

SPARTN has vowed to send 50 percent of all proceeds donated to them for the next seven days to Eric.

Those who wish to donate can do so here. 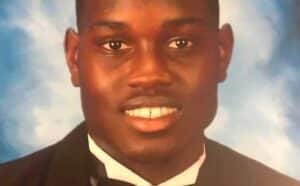