The jury reached their verdict in the Ahmaud Arbery murder case on Wednesday, finding all three men guilty.

Ahmaud Arbery’s mother Wanda Cooper-Jones reacts to the guilty verdicts for the 3 men who killed her son. pic.twitter.com/P8T8sukMOL

The defense for the three men claimed that they were attempting to perform a legal citizen’s arrest on Arbery when Travis McMichael shot him in “self defense” in February 2020. They argued that the men believed that he was attempting to rob a nearby home.

The prosecution claimed that the victim was just jogging when he was pursued by Bryan and the McMichaels.

“The McMichaels grabbed guns and jumped in a pickup truck to pursue the 25-year-old Black man after seeing him running in their neighborhood outside the Georgia port city of Brunswick in February 2020. Bryan joined the pursuit in his own pickup and recorded cellphone video of Travis McMichael fatally shooting Arbery,” the Associated Press reports.

The report continued on to say that “the McMichaels told police they suspected Arbery was a fleeing burglar when they armed themselves and jumped in a pickup truck to chase him. Bryan joined the pursuit when they passed his house and recorded cellphone video of Travis McMichael blasting Arbery at close range with a shotgun as Arbery threw punches and grabbed for the weapon.”

Two months after the shooting, video of the incident was released online — prompting massive backlash from the Black Lives Matter movement.

Prosecutors did not argue during the murder trial that the shooting was racially motivated. However, federal authorities have charged the men with hate crimes, claiming that they chased Arbery down because of the color of his skin. That trial will begin in February.

The murder charges carry a minimum of a life sentence. The judge will now decide if they will have the possibility of parole or not.

Travis McMichael was found guilty on all nine charges ranging from aggravated assault to murder.

Gregory McMichael was found not guilty of malice murder — but guilty of all other charges, including felony murder.

William Bryan Junior was found not guilty on three of his charges, but guilty on six others. Crimes he was found guilty of include felony murder and aggravated assault. 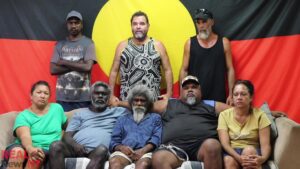