A new federal bill would exempt foreign truck drivers from showing proof of vaccination to cross the United States border into Mexico or Canada.

In a press release announcing the bill, Hoeven said, “At a time when we’re already facing supply chain constraints, it makes no sense to make it even more difficult to transport goods and products across our shared border. Hamstringing truckers with vaccine mandates just to cross the border only exacerbates the existing supply chain challenges.”

Cramer added that vaccine mandates at the borders “are an extreme abuse of power with far-reaching consequences.”

“We’re suffering through a supply chain crisis, and we need every trucker moving every product to every consumer and every place possible,” Cramer said. “Our bill provides much-needed relief from burdensome vaccine mandates to allow commerce to flow freely throughout North America.”

In his statement, Scott said Canada should “drop its ridiculous mandate on foreign drivers” and emphasized the intergal role of trucking in the daily lives of U.S. citizens.

“Truck drivers are the backbone of America’s economy. My dad was a truck driver and I know firsthand how critical these men and women are to getting products flowing to American families and businesses again,” Scott said. “President Biden’s inflation and supply chain crises are devastating so many Americans, especially our poorest families like mine growing up. By pushing these ridiculous mandates, he is only making things worse.”

Alluding to the Freedom Convoy 2022, Scott added, “Joe Biden would be wise to take note of what’s happening in Canada and see that the top-down, ‘government controls all’ approach doesn’t work.”

“When I ran my business, a third of my employees were truck drivers, so I know firsthand how important they are to our economy and our country,” Braun said in the joint statement. “Federal government vaccine mandates are wrong and we should not make our supply chain problems worse by turning away commercial truck drivers temporarily entering the country for business for not showing their vaccination papers.”

“If the Biden administration is that worried about unvaccinated individuals entering into the USA, they should secure the southern border and stop the millions of unvaccinated illegal aliens from flooding into our country,” Blackburn said.

The Biden Administration has denied illegal immigration has contributed to the domestic spread of COVID-19 despite data from Immigration and Customs Enforcement and action taken by border states like Texas.

Florida Congressman Carlos Giménez has already agreed to introduce a companion policy to the TRUCKER Act in the House later this week.

“Time and time again, Joe Biden has made catastrophic decisions that have hurt the American people,” the congressman said. “By imposing an unnecessary vaccine mandate on truckers from Canada and Mexico conducting trade with the United States, Biden has further stifled our supply chains and made trade with our most important partners too costly. It is time for us to end this ridiculous vaccine mandate on truckers and begin taking steps to return America back to normal.”

Under the proposed policy, commercial drivers who are not American citizens and who are seeking temporary access to the country for business would be exempt from any COVID-19 vaccine requirement.

The bill has been referred to the Committee on Homeland Security and Governmental Affairs for review. 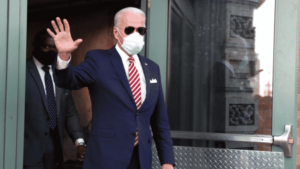