Sen. Rand Paul Calls for Top 10 Percent of the FBI to Be Replaced

Sen. Rand Paul has called for the top ten percent of FBI leadership to be replaced.

The Kentucky senator discussed the issue during an interview with Eric Bolling on Newsmax TV’s “The Balance.”

Sen. Paul stated that the top leadership at the FBI has become a “political class” and that reform is “only going to happen if we get a president who gets rid of the top 10% and brings in some law enforcement people.”

“I think it’s swamp fever, Potomac fever,” Sen. Paul said. “The ones closest to the swamp have become infected with influence and power and politics. I play golf with a retired FBI agent. He’s conservative. Most of the agents that I meet in the field are conservative. They’re typical law enforcement kind of people.”

The senator continued, “but really it’s the political class up here that is corruptible and [has] become very left-wing…these are the people infiltrating the FBI at the highest levels.”

To fix this, in Sen. Paul’s view, he said that “we need a thorough cleaning.”

During the interview, Sen. Paul also explained that “no one likes hypocrisy,” while discussing the agency’s treatment of former President Donald Trump versus how they have handled President Joe Biden.

“So I think it looks bad when you call for the prosecution and throw the book at Donald Trump because he has classified information and he wasn’t doing the right thing and then you are doing the exact same thing. The one thing that may be different here, we don’t know, is whether or not the classified documents have anything to do with Hunter Biden’s sort of scheme to take advantage of his father’s name and make money in foreign countries. If the documents are related to Hunter Biden’s business dealings then we are talking a whole other world of problems for them.” 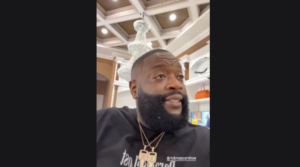 Rapper Rick Ross Will Not Drive a Tesla Due to Fear Government Will Override Car, Take Him to Police