Sen. Joe Manchin Sits on Republican Side During State of the Union

West Virginia Sen. Joe Manchin sat on the Republican side of the House chamber during President Joe Biden’s first State of the Union address.

Manchin was the only one to sit on the opposite party’s side and was seated between Republican senators Mitt Romney and Roger Wicker.

According to the senator’s office, Manchin was attempting to remind people that “bipartisanship works.”

“Sen. Manchin sat with his colleague Sen. Romney to remind the American people and the world that bipartisanship works and is alive and well in the U.S. Senate,” Manchin spokesman Sam Runyon told Axios.

VIDEO: @SenatorRomney says he asked @Sen_JoeManchin to sit next to him at SOTU

Manchin, who sat with GOP Senators during the President’s speech says he was: “showing unity, working together. showing the whole world we’re together in standing behind Ukraine” pic.twitter.com/URL3sJ2nBV

Speaking to a report after the speech, Manchin said he was “showing unity, working together. showing the whole world we’re together in standing behind Ukraine.”

Despite his seating, Manchin stood and applauded Biden’s policies along with his fellow Democrats — most of the time.

Manchin did not rise when Biden called for expanding child tax credits, which he has loudly opposed.

The Mountain State senator is no stranger to opposing his own party’s policies. As the situation in Ukraine has unfolded, Manchin has been sharply critical of the Biden administration’s energy policies.

“While Americans decry what is happening in Ukraine, the United States continues to allow the import of more than half a million barrels per day of crude oil and other petroleum products from Russia during this time of war,” Manchin said.

Manchin also faced backlash and protests by his own party when he refused to vote for the “Build Back Better” spending package, killing the effort. He cited inflation, the federal debt, and omicron as some of the reasons for his opposition. He and fellow moderate Senator Kyrsten Sinema also thwarted efforts by the president and Senate to remove the filibuster to push through changes to voting rights.

There is currently a 50/50 split in the Senate, but Vice President Kamala Harris holds the tie-breaking vote giving Democrats the majority.

If Manchin joined the GOP, it would flip the Senate to 51-49, and Senate Minority Leader Mitch McConnell would become the majority leader.

Republicans have repeatedly invited him to switch sides and join their party. Still, he has maintained that if he left the Democratic Party, he would register as independent and continue to caucus with them — leaving Democrats in the majority.

In 2020, former President Donald Trump carried West Virginia with 68.62 percent of the vote. 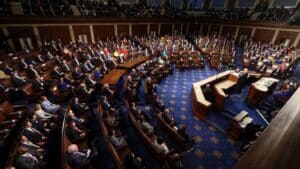 A Look At Biden's First State of The Union Address