The European Union is poised to remove American citizens from its so-called “Safe Travel List” as the Delta Variant continues to surge in places like Florida, Hawaii, Oregon, and Louisiana.

“EU governments are set to blacklist American tourists later this afternoon after a surge in US infections. The decision is not automatically binding but it sets the framework for new European restrictions on transatlantic travel after a summer of eased rules,” reports The Times.

“One key factor in the decision has been America’s refusal since June to allow vaccinated European travellers to visit the US for non-essential reasons, such as tourism or visiting family members,” adds the British newspaper.

Most European countries re-opened their borders to vaccinated Americans back in June after discontinuing travel for more than a year.

“The decision to urge the reimposition of travel restrictions on U.S. travelers was first reported by Reuters. European officials who outlined the plan did so under condition of anonymity because they were not authorized to discuss the matter publicly ahead of an announcement planned for Monday,” claims the New York Times.

The announcement comes days after Dr. Anthony Fauci predicted the pandemic could be under “control” in the United States by spring of 2022.

“What does control look like?” asked CNN’s Anderson Cooper.

“If we can get through this winter and get the majority of non-vaccinated people vaccinated, I hope we can start to get some good control in the spring of 2022,” Fauci stated. 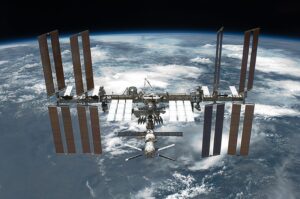 There Are Cracks in The ISS, According to Russian Cosmonauts