There Are Cracks in The ISS, According to Russian Cosmonauts

Russian Cosmonauts say there are cracks in a section of the International Space Station that could widen.

Vladimir Solovyov, the chief engineer of rocket and space corporation Energia, told RIA news agency, “Superficial fissures have been found in some places on the Zarya module. This is bad and suggests that the fissures will begin to spread over time.”

Zarya is an inhabited module attached to the ISS. It is unclear what consequences the cracks have caused, including potential air leaks.

Russia’s space agency — known as Roscosmos — reported an air leak caused a drop in pressure in the Zvezda service module which provides the crew with some living quarters. The air leak was discovered in September 2019 and repaired this past March.

“The Zarya is the first module of the ISS to have been launched, having been sent up by the Russian space agency in 1998. Zarya – which means ‘dawn’ in Russian – provided the initial electrical power and propulsion to the station, and guided the ISS through its early stage,” reports RT.

Last month, Russian officials reported the space station was temporarily thrown out of control by either a software glitch or possibly a lapse in human attention.

“Jet thrusters on the Russian research module Nauka inadvertently reignited a few hours after it had docked, causing the entire orbital outpost to pitch out of its normal flight position with seven crew members aboard,” per Reuters.

There are currently five Russian segments at the ISS, including Zarya, Zvezda, Poisk, Rassvet, and Nauka. Nauka is the most recent addition. It arrived last month and can generate oxygen for six people as well as recycle water from urine.

Roscosmos chief Dmitry Rogozin announced in April that “work had begun on the [first] module of a new station, after officials warned that Russia was considering pulling out of the ISS, one of the few successful examples of cooperation with the West.”

Moscow may withdraw from the ISS in 2025 in order to launch its own space station.

“Russia’s Deputy Prime Minister Yury Borisov said in recent days that Moscow was considering whether to leave the ISS program from 2025 because of the station’s age,” said The Moscow Times. Roscosmos has not currently made an official decision.

Officials say much of the International Space Station has started to age. They are predicting an “avalanche” of falling, broken equipment sometime after 2025. 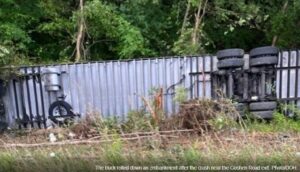