Author: Tdorante10 / The image has been rescaled and cropped

Two banking regulators fined JPMorgan Chase a total of $200 million after the company was charged with evading federal regulators by using WhatsApp and other platforms.

Under federal law, financial firms must keep detailed records of communication between brokers and clients. This includes correspondence on official company devices, including phone conversations and online messaging, as well as work-related communication on employees’ personal devices, like cell phones. Regulators review the records to ensure that no antitrust or anti-fraud laws are violated.

JPMorgan admitted to “widespread” record-keeping failures. On Dec. 17, it agreed to pay the Securities and Exchange Commission $125 million. As a second term of the settlement, the SEC announced JPMorgan would be required to hire a compliance consultant who will review the bank’s policies and training practices.

“The firm’s actions meaningfully impacted the SEC’s ability to investigate potential violations of the federal securities laws,” the SEC said in a statement.

The company has also been fined $75 million by the Commodity Futures Trading Commission for using unapproved communication.

The CFTC said, “JPMorgan failed to maintain thousands of business-related communications in connection with its commodities and swaps businesses, and thus failed diligently to supervise its businesses as CFTC registrants, in violation of CFTC recordkeeping and supervision provisions.”

“Firm compliance with recordkeeping and associated supervision requirements is essential to the CFTC’s efforts to promote the integrity, resilience, and vibrancy of the U.S. derivatives markets,” said Acting Director of Enforcement Vince McGonagle in a statement. “Today’s enforcement action demonstrates the Division of Enforcement’s commitment to aggressively investigating and prosecuting violations of these requirements.”

The CFTC says the bank has violated the Commodity Exchange Act (CEA) and regulations since at least July 2015.

“The move is the latest sign of an ongoing battle between regulators, banks and employees over the use of personal devices. Policing the use of unofficial channels became even more pressing when most of Wall Street went remote during the coronavirus pandemic,” reports CNBC. “Regulators in New York and London have ratcheted up enforcement of record-keeping rules recently as traders migrated to encrypted messaging platforms including WhatsApp, Signal or Telegram.”

Monitoring employee communication became more challenging for many banks when they shifted to a work-from-home format during the COVID-19 pandemic.

“In recent months, regulators have questioned a number of big banks, including Bank of America Corp., Citigroup Inc., Morgan Stanley and Credit Suisse Group AG, about how they track employee communications, some of the people said. The status of that regulatory effort, and whether other entities would face fines, couldn’t be determined,” per Fox Business.

JP Morgan Chase has not made a public comment on the fine.

According to Newsmax, “the penalty is one of the first major enforcement actions brought under SEC Chair Gary Gensler, who was appointed by Democratic President Joe Biden and who has pledged to crack down on misconduct by Wall Street companies.”

The record-keeping violation fine is reported to be the largest ever issued by the SEC. 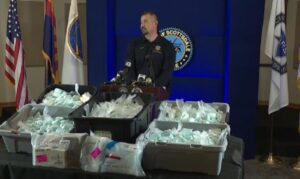 Arizona Police Seize Record Breaking Amount of Fentanyl, Enough to 'Kill Half the Population' of the State