San Francisco Mayor London Breed is defending her night out partying without a mask, because she “had a good time” and it was a “monumental” event because R&B group Tony! Toni! Toné! was performing.

Children in San Francisco are required to wear masks and social distance all day at school under city mandates.

Mayor Breed was caught on camera partying it up at an indoor nightclub on Thursday evening.

London Breed, mayor of San Francisco, the first US city to impose a lockdown and the one with the strictest vaccine mandate, filmed partying without a mask despite the city’s indoor mask mandate, once again breaking her own COVID rules.pic.twitter.com/dzcc19z1Al

Speaking to the press about the scandal, Breed gushed about the performance and blamed the “fun police” for making it into an issue.

“I was feeling the spirit and I wasn’t thinking about a mask.”pic.twitter.com/lFTFCgzihZ

“We don’t need the fun police to come in and micromanage and tell us what we should or shouldn’t be doing,” said Breed, who has implemented some of the strictest pandemic mandates in the nation.

Under the city’s mandate, people attending indoor performances and events must be masked unless they are eating or drinking. It also specifically says that “people are urged to be seated at a table or positioned at a stationary counter or place while eating or drinking.”

Apparently, this does not apply to Breed because she was “feeling the spirit.”

“My drink was sitting at the table,” said Breed. “I got up and started dancing because I was feeling the spirit and I wasn’t thinking about a mask.”

Meanwhile, the “fun police” will continue to enforce the rules for everyone else. 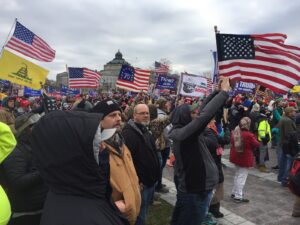