On the 20th anniversary of the September 11th attack, failed Democratic senate candidate Pam Keith posted a tweet saying that the riot at the Capitol building on January 6th was worse than 9/11. Social media and mainstream outlets alike erupted into a fierce debate on which event was more tragic. Not only is it disrespectful to all 2,977 victims from 9/11 to draw this comparison, but it’s absolutely false to say that it was less serious than January’s events. The largely overblown protest at the Capitol doesn’t come close to having the same the loss of life, cultural impact, or political consequences that occurred as a result of the 2001 terror attack.

9/11/2001 ceased being the worst thing that happened to America in my lifetime.

It’s really weird and painful to process and say that.

But it’s the truth.

And quite frankly… it’s not even close.

As expected, this tweet received a lot of backlash. The replies pointed out the obvious: nearly 3,000 people were killed when Al-Qaeda terrorists hijacked four planes and crashed them, killing everyone on board as well as thousands of people trapped in the Twin Towers and the Pentagon. On January 6th, two deaths occurred during the riot. Ashli Babbitt, 35, was fatally shot in the shoulder while attempting to get through a broken window into the building by a Capitol police officer. The officer’s actions were described as “lawful and within Department policy,” by the United States Capitol Police according to WUSA9. Rossanne Boyland, 34, also died of an unrelated drug overdose. While the circumstances of these deaths were certainly tragic and should have been avoided, it is unfortunate that Keith, a Navy veteran, decided to compare the two events as if the loss of life was at all similar.

“Quite frankly … it’s not even close,” she said, in reference to the Capitol riot being worse than 9/11.

“The 9/11 terrorists, the January 6 attackers and Donald Trump do indeed share the ‘same foul spirit.’”

Obeidallah cited former president George W. Bush’s statement that while there “is little cultural overlap between violent extremists abroad and violent extremists at home,” they share the same “disdain for pluralism” and “disregard for human life.” Of course. Because the protestors at the Capitol killed nearly 3,000 people … right? These comparisons make zero sense, but are being promoted by politicians and commentators alike.

As a result of 9/11, entire government institutions and policies were created to increase our entire nation’s security. The Department of Homeland Security (DHS), the Transportation Security Administration (TSA), and the Patriot Act are only a few among the drastic measures taken by the federal government to ensure that nothing like the 9/11 attack would occur again. Having grown up in a post 9/11 world, I have known nothing but seemingly harmless things such as the occasional pat-down before boarding a plane, but also great travesties such as the longest war fought in American history. The U.S. had a military presence in Afghanistan for 20 years, with 18- and 19-year-olds who weren’t even born yet on 9/11 laying down their lives for the bloated military industrial complex caused by our government’s response to the attack.

After the Capitol riot took place, our nation seemed more polarized and partisan than ever before. Individuals on both sides of the political aisle pointed fingers, played the blame game, and came up with conspiracies to justify their own hatred of people in the opposite party. In contrast, the tragic attack carried out on 9/11 unified the country in mourning after the nation watched first responders lay down their lives for complete strangers. The juxtaposition of America’s reactions to both events illustrates that there is no valid comparison of the severity. When events of mass tragedy and loss take place, Americans tend to band together as one to condemn evil instead of turning on each other. 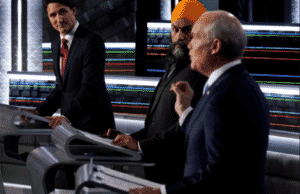