A Russian teen has been sentenced to five years in prison over a plot to blow up the nation’s Federal Security Service building in a video game.

Nikita Uvarov, 16, was charged with terrorism over his plan to destroy a replica of the building in Minecraft when he was 14-years-old.

Uvarov, who is from Kansk, Siberia, was sentenced on Thursday morning.

“The Eastern District Military Court found Uvarov guilty of charges of terrorism, namely, undergoing training to carry out criminal activity, his lawyer Pavel Chikov announced,” RT reports. “According to the investigators, Uvarov and two other males used the video game to construct the buildings of the Kansk police department and the city’s FSB division and plotted to virtually blow them up. Russian newspaper Kommersant reported that the teenagers used the gaming world to demonstrate how a real explosion of the buildings would take place.”

“I am not a terrorist, I am not guilty,” Uvarov said during his closing statement to the court. “I would just like to finish my studies, get an education and go somewhere far away from here, somewhere I don’t irritate anyone from the special services.”

As the court’s decision was announced, Uvarov cried out, “I’m a child, I’m not a terrorist.”

“Sorry I couldn’t set you free – I did everything in my power,” his lawyer was heard telling him after the ruling.

The teenager has also claimed that he has been subjected to physical violence since being detained.

According to a report from The Mirror, prosecutors alleged that the teenager’s actions crossed into the real world because he and some friends put up posters in support of Azat Miftakhov, an anarchist accused of attacking the offices of United Russia.

After the poster incident, law enforcement seized the teen’s phones and discovered the Minecraft plan and videos of the boys using fireworks and pyrotechnics.

“Following their arrests, the FSB searched the teens’ phones, where they uncovered videos of them making pyrotechnics and allegedly throwing Molotov cocktails at a wall, as well as a plot to blow up a virtual FSB building they had built in Minecraft,” the Moscow Times reports.

Lawyers for the teenagers pointed out that the kids were playing with the pyrotechnics in empty fields and “had no intention of causing harm.”

The Times report adds that the teens’ family members, former teachers, and lawyers have described them as “normal” and “like other kids.”

Two other boys who were investigated over the posters and video game, Bogdan Andreev and Denis Mikhailenko, were released on suspended sentences of three and four years after aiding the investigation into Uvarov. All of the boys were 14-years-old at the time of their arrests. 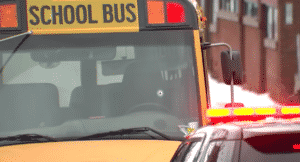