In his executive order, Biden said businesses with 100 or more employees must require their workers to receive both COVID-19 doses or undergo weekly testing.

Biden’s mandate would also cut federal funding to healthcare facilities unless all of their employees are vaccinated.

The hospitals, located in the Texas panhandle, claim this could cause them to shut down.

Jerry Jasper, the CEO of Brownfield Regional Medical Center, told KCBD he could lose 20% to 25% of his staff because of the mandate.

Larry Gray, Seminole Hospital District CEO, told the outlet that while 70% of his staff has been vaccinated, the mandate is the wrong approach.

“I think the mandate is just a terrible message because if the vaccinations are working, why do you have to mandate people to get the vaccines? What happens to individual choice and medical decisions between the patient and their doctor, which is all of the things that we’re trying to support,” he said.

Texas Organization of Rural and Community Hospitals reported in 2019 that 26 of the state’s rural hospitals closed over the decade largely because of Medicare cuts totaling $50 million a year. Additionally, there was an annual underpayment of $100 million by Texas Medicaid.

The National Center for Rural Health Works notes that rural hospitals are often “one of the largest employers in a rural economy, typically one of the top two employers.”

Both Jasper and Gray are frustrated that the federal mandate conflicts with state orders.

In August, Governor Greg Abbott banned vaccine mandates in Texas regardless of its status with the Food and Drug Administration through an executive order.

The governor had issued an order on July 29 that  stated that “no governmental entity can compel any individual to receive a COVID-19 vaccine administered under an emergency use authorization.”

“Vaccine requirements and exemptions have historically been determined by the legislature, and their involvement is particularly important to avoid a patchwork of vaccine mandates across Texas,” Abbott said in a statement.

Neither Abbott’s order nor the legislation address vaccine requirements for private business employees.

Attorney General Ken Paxton has said he will fight Biden’s federal vaccine mandate, which will impact two-thirds of all U.S. workers in the federal and private sectors. 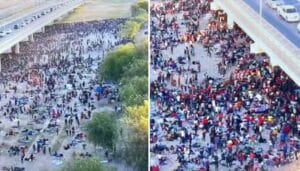 Over 8,000 Mostly Haitian Migrants Waiting to Be Processed Under a Bridge in Texas