President Biden announced Thursday night that vaccinations will be required for most federal employees, health care workers, companies that contract with the government, and private companies that employ 100 or more workers. Affected workers will have the option of being tested weekly for COVID-19 instead of getting the vaccine, despite previous concerns.

“We’ve been patient, but our patience is wearing thin,” Biden said in his national address. “And your refusal has cost all of us. So, please, do the right thing.”

Healthcare facilities that receive federal funding are now required to have their staff be fully vaccinated, impacting nearly 17 million workers. In total, an estimated 100 million Americans will be impacted by the mandate.

Large companies could be charged $14,000 per violation. They must also provide time-off for workers to get the vaccine and recover from any side effects, per Business Insider.

Bloomberg says the “move marks a significant hardening of the administration’s position on vaccine mandates amid the surge in the delta variant that threatens to overwhelm hospitals in parts of the U.S.”

“Joe Biden told Americans when he was elected that he would not impose vaccine mandates. He lied. Now small businesses, workers, and families across the country will pay the price,” she said in a statement. “Like many Americans, I am pro-vaccine and anti-mandate … Many small businesses and workers do not have the money or legal resources to fight Biden’s unconstitutional actions and authoritarian decrees, but when his decree goes into effect, the RNC will sue the administration to protect Americans and their liberties.”

Several government agencies have already announced vaccine requirements, including the Department of Veterans Affairs, Department of Health and Human Services, the Indian Health Service, and the National Institute of Health. Last month, the Pentagon announced all service members are required to get vaccinated. These requirements, in turn, impact Americans in every state.

“Biden is also expected to outline plans to increase virus testing in schools, in an effort to keep them open safely, amid other measures to show that his administration is working to tackle the alarming rise in COVID-19 cases, which Biden has blamed for last month’s weaker-than-expected jobs report. He’s warned the surge could further imperil the nation’s economy as some pandemic safety net protections expire,” reports the Chicago Sun-Times.

Vaccinations are also required by colleges and universities in at least 40 states.

“Federal officials are moving ahead with plans to begin administering booster shots of the mRNA vaccines to bolster protection against the more transmissible delta variant of the virus. Last month Biden announced plans to make them available beginning on Sept. 20, but only the Pfizer vaccine will likely have received regulatory approval for a third dose by that time. Federal regulators are seeking additional data from Moderna that will likely delay its booster approval until October,” per AP News.

Currently, 53% of Americans have been fully vaccinated and 63% have had at least one dose of the COVID-19 vaccine. An estimated 25% of American adults have not been vaccinated. 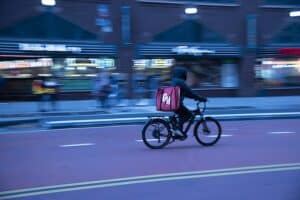