DoorDash, Grubhub, and Uber Eats want to stop the enforcement of fee caps

When New York City was hit by the coronavirus in early 2020, food delivery surged as people stayed in their homes. For some restaurants, food delivery services became a key component of staying in business. To address the increasing surcharges, the city regulated the commissions that services could charges restaurants who were reliant on them. The delivery caps include limiting delivery fees to 15% and capping non-delivery fees at 5%.

In August, the New York City Council approved a bill that would permanently limit the fee delivery companies can charge. It would also require them to have an operating license which they would need to renew every two years.

“The companies claim the law is unconstitutional because ‘it interferes with freely negotiated contracts between platforms and restaurants by changing and dictating the economic terms on which a dynamic industry operates,’” reports CNBC.

The lawsuit, filed in the Southern District of New York, adds that the regulation hurts the companies and the local restaurants of the city. The companies want the court to issue an injunction to prevent the law from being enforced.

The suit also asks for monetary damages as well as a jury trial.

According to customer payment data collected by Bloomberg Second Measure in July, DoorDash accounts for 36% of sales in New York City, Grubhub 34%, and Uber Eats and Postmates make up the final 30%.

Similar legal disputes are taking palace in other cities. DoorDash and Grubhub filed a lawsuit against San Francisco after the city adopted a permanent 15% delivery fee cap. Grubhub was also in a face-off with Massachusetts Attorney General Maura Healey, who accused the company of overcharging restaurants during the pandemic.

The pandemic, social distancing, and lockdown requirements last year in many ways strengthened the food delivery industry. Four of the major companies — DoorDash, Uber Eats, Grubhub, and Postmates — had a combined revenue of $5.5 billion between April and September 2020, according to MarketWatch. 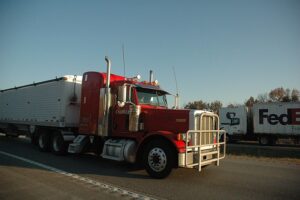