Over 8,000 Mostly Haitian Migrants Waiting to Be Processed Under a Bridge in Texas

Over 8,000 migrants, most of whom are Haitian, are currently crowded under a Texas border bridge waiting to be processed.

The Federal Aviation Administration has reportedly restricted the airspace above the bridge to prevent drones from flying over.

Thousands more migrants are expected to pour into the already overflowing makeshift Del Rio camp in the coming days.

BIDEN BORDER DISASTER: Over 10,000 illegal migrants now assembled under a Texas highway bridge at the southern border. Biden’s FAA is restricting drone flyovers to prevent the American people from seeing the catastrophic migration flow into the United States. #BidenDisaster pic.twitter.com/rKW5yY4Uqe

The surge is so overwhelming that Customs and Border Protection (CBP) is sending additional agents from across the country to help.

“The Border Patrol is increasing its manpower in the Del Rio Sector and coordinating efforts within the Department of Homeland Security and other relevant federal, state and local partners to immediately address the current level of migrant encounters and to facilitate a safe, humane and orderly process,” Customs and Border Protection said in a statement. “To prevent injuries from heat-related illness, the shaded area underneath Del Rio International Bridge is serving as a temporary staging site while migrants wait to be taken into USBP custody.”

Jon Anfinsen, the top Border Patrol union official in the Del Rio Sector, told Arkansas Online that sanitary conditions are the site are very poor. Currently, there are only 20 portable toilets at the camp for the roughly 8,000 people.

“We’re scrambling to bring every resource we can, but it’s a logistical nightmare,” he said. “We’re pulling agents from across the country to help, but they’re not going to be there today, and we’re just trying to keep heads above water.”

“Many agents are mothers and fathers, and seeing kids in this situation is sad for everyone,” he said. “Morale is terrible.”

Customs and Border Protection figures show that more than 29,000 Haitians have arrived at the southern border over the past 11 months. Mexican authorities have been declining to take back Haitians that the Biden administration has tried to expel under Title 42 of the U.S. public health code in recent months.

Arkansas Online reports that U.S. District Judge Emmet Sullivan ruled on Thursday that the U.S. government must stop using the Trump-era public health order to quickly return migrants with children who are caught at the border. The judge said that they have two weeks to stop using it because it is “unnecessary and improperly relies on the threat posed by covid-19 to deprive people of their right to seek asylum in the United States.”

The lawsuit was filed by the American Civil Liberties Union and others on behalf of migrant families.

“President Biden should have ended this cruel and lawless policy long ago, and the court was correct to reject it today,” said Omar Jadwat, director of the ACLU’s Immigrants’ Rights Project, in a statement about the ruling.

Del Rio Mayor Bruno “Ralphy” Lozano is begging the Biden administration to do something to end the surge.

“I thought the worst-case scenario was having a couple people, maybe 150 people roaming the streets,” Lozano told Arkansas Online. “Although I foreshadowed a worst-case scenario, this is probably a worse case of worst-case scenarios. I need the administration to recognize that there is a border crisis happening in real time right now and it has dire consequences on security, health and safety.”

In August alone, 208,887 migrants were detained at the border. 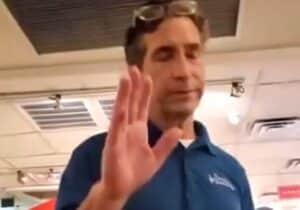 Family Kicked Out of New York Pizza Shop for Not Being Vaccinated, Nobody Defends Them