Family Kicked Out of New York Pizza Shop for Not Being Vaccinated, Nobody Defends Them

A video has gone viral of a family with small children being kicked out of Juliana’s Pizza in Brooklyn for not being vaccinated.

Other diners not only ignored what was happening — but supported it.

Ray Velez, the man in the confrontation, posted a video of the incident to his Instagram page, @savingsovereignty, on Tuesday.

“Juliana’s pizza in Brooklyn Discriminates. The world needs to see the ugly face of segregation. @julianaspizza you my friends need to wake up, I told I would expose your business for it’s participation in the modern day segregation. Share this far and wide everyone discrimination will not be tolerated,” Velez captioned the video.

A post shared by UNITED STATES IS A CORPORATION (@savingsovereignty)

The so-called “Key to the City” went into effect this week, requiring New Yorkers to show a vaccine passport to enter restaurants, museums, gyms and other entertainment venues.

Video of the incident begins when Velez and his family are seated at a table and asked to provide their vaccine cards.

“So you’re going to enforce segregation because we just told you that we’re religiously exempt,” Velez says.

“You told us you had your vaccination card,” the employee replies.

“I never told you any of that. I would never say that,” Velez argues. “We don’t have to leave.”

Other customers were not sympathetic to Velez.

“Everybody’s in here okay setting segregation in society, everybody’s okay with that?” Velez asks diners. “Oh, we don’t have our vaccine cards so now the kids can’t eat? We can’t eat, you guys are okay with that? Is this the America you want to live in?”

Customers can be heard responding “yes,” and one even flips him off.

The restaurant replied to the incident on Twitter, saying “we take the health and safety of our customers seriously. We also face steep fines if we violate City Hall’s order. We are permitted to and do accommodate unvaccinated individuals for outdoor, socially distanced dining & takeout. We appreciate your understanding & support.”

We take the health and safety of our customers seriously. We also face steep fines if we violate City Hall’s order. We are permitted to and do accommodate unvaccinated individuals for outdoor, socially distanced dining & takeout. We appreciate your understanding & support. https://t.co/5qWN6zIxBU

Timcast has reached out to the restaurant to ask about their policy for medical exemptions — and if they are also forced to dine outside.

We will update this article if a response is provided. 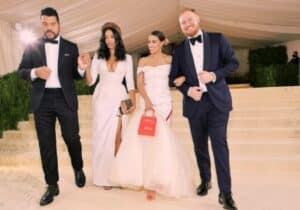