Protesters began gathering outside the Kenosha courthouse on Tuesday afternoon as the jury entered deliberations in the Kyle Rittenhouse trial.

There were both supporters of Rittenhouse and leftist activists who believe that he should be found guilty gathered outside the building.

Some tension is growing with a few counter protesters who have arrived outside the courthouse, one chanting earlier “Black Lives Matter for pedophiles” and almost gets kicked.#Kenosha pic.twitter.com/cGblvC4X3l

Man shouts that Kyle Rittenhouse is a hero and asks protesters, “how many cars are you gonna’ fuck up tonight?”#Kenosha pic.twitter.com/PYsr22zi5y

Mister @ScottAdamsSays, at the Kenosha courthouse the BLM and ANTIFA protesters are threatening to kill those who don’t agree with them. pic.twitter.com/E1bGrm3aa4

Arguments between opposing protesters outside the courthouse – one group describing themselves as 2nd Amendment supporters, others calling for the conviction of Kyle Rittenhouse #Kenosha pic.twitter.com/F2IOOApfEN

Approximately 45 minutes into their deliberations, jurors requested 11 copies of the jury instructions, specifically the portions that apply to self defense.

Rittenhouse maintains that he had been acting in self defense, as he was in imminent danger. 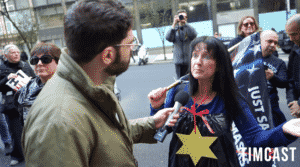