Devin Hogan, chair of the Minneapolis Democratic-Farmer-Labor Party (DFL), faced a backlash on social media this week after publishing an op-ed that claims setting police stations on fire is an “act of pure righteousness [and] a genuine revolutionary moment.”

“The youth of Minneapolis have grown up seeing the police murder people who look like them without consequences. They are out of f***s to give. Deliberately antagonizing them was a cruel excuse to give an opportunity to knock heads. Everything that followed was a proportional response,” Hogan wrote in the tri-monthly newspaper Southside Pride.

“Like it or not, setting the Third Precinct on fire was a genuine revolutionary moment. An act of pure righteousness to open new worlds of understanding. The people declared themselves ungovernable and unilaterally took their power back. The largest international human rights movement in modern history had begun. The youth of Minneapolis carried all of this. The cops started it,” he adds.

“Keep focus. Eyes on the prize. Remember the demand of the streets. The blood and treasure spent. This is our job. Minneapolis must answer the call. For real this time. For real for real. Do it for the kids,” concludes Hogan.

His comments drew rebukes from Republicans and many Democrats. 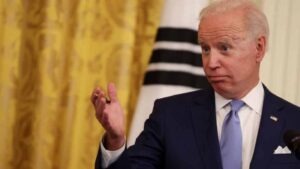 Biden On Cuomo's Resignation: 'He Did A Hell Of A Job' On 'Everything'