Biden On Cuomo's Resignation: 'He Did A Hell Of A Job' On 'Everything'

Shortly after New York Governor Andrew Cuomo’s resignation for sexually harassing 11 women, President Biden said Cuomo did “a hell of a job” on “everything” as governor.

“You’re someone who spends a lot of time with mayors and governors,” a reporter said. “How would you assess his 10 and a half years as governor of the state?”

“In terms of his personal behavior or what he’s done as a governor?” Biden asked.

“What he’s done as a governor,” the reporter said.

This is not the first time Biden has publicly praised Cuomo.

“Your governor in New York’s done one hell of a job. I think he’s the gold standard,” Biden said during an appearance on The Tonight Show Starring Jimmy Fallon last year

Biden’s “gold standard” included a directive made by Cuomo that barred nursing homes from refusing the entrance of people infected with COVID-19 — effectively mandating the most vulnerable population to potentially be exposed to the virus.

“The new number of 9,056 recovering patients sent to hundreds of nursing homes is more than 40% higher than what the [New York] state health department previously released,” The Associated Press reported. “The new figures come as the Cuomo administration has been forced in recent weeks to acknowledge it has been underreporting the overall number of COVID-19 deaths among long-term care residents. It is now nearly 15,000 up from the 8,500 previously disclosed.”

Within two months of the directive, nursing home deaths had already soared to over 9,000. The number was included on a report from state health officials and was removed by Cuomo’s aides at his direction.

“The number — more than 9,000 by that point in June — was not public, and the governor’s most senior aides wanted to keep it that way,” the New York Times reported. “They rewrote the report to take it out, according to interviews and documents reviewed by The New York Times.”

Cuomo book, titled “American Crisis: Leadership Lessons from the COVID-19 Pandemic,” describes how Cuomo “was relentless in his pursuit of scientific facts and data.” 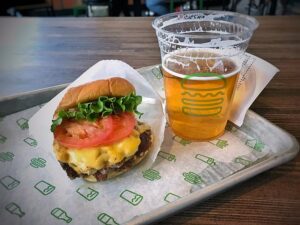 Shake Shack Will Raise Prices Due to Looming Inflation