Republican Texas Senator John Cornyn has said that he texted Senator Joe Manchin urging him to join the GOP.

Speaking to Austin news station KXAN, Sen. Cornyn said that he invited Manchin to switch parties as he faces continued backlash from Democrats for refusing to vote for the Build Back Better spending package.

Manchin cited inflation, the federal debt and omicron as reasons for his refusal to continue discussing the bill.

Cornyn said that he sent Manchin a text saying, “Joe, if they don’t want you, we do,” but did not receive a reply from the West Virginia politician.

“I don’t know what he will decide to do. But I do know West Virginia has gotten increasingly red. …So yeah, we’d love to have him. That would change the majority,” Cornyn said.

There is currently a 50/50 split in the senate, but Vice President Kamala Harris holds the tie-breaking vote giving Democrats the majority.

If Manchin joined the GOP, it would flip the senate to 51-49, and Senate Minority Leader Mitch McConnell would become the majority leader.

Manchin has previously said that if he left the Democratic Party, he would switch to independent — but would still caucus with Democrats, leaving them as the majority. However, during an interview with WVMetroNews on Monday, the senator said “I would like to hope that there are still Democrats that feel like I do. I say I’m fiscally responsible and socially compassionate. Now if there are no Democrats like that, they’ll have to push me wherever they want to.”

A poll of West Virginia voters last month found that Manchin has an overall job approval rating of 60 percent compared to Biden’s 32 percent.

Nearly 75 percent of WV voters also said that they believe Manchin should oppose the Build Back Better plan.

In 2020, former President Donald Trump easily carried the state with 68.62 percent of the vote. 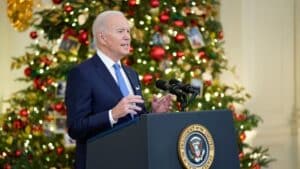